Thursday, 03 December 2020_The number of Muslim Americans running for political office in the US this year has set a new record, says a report published by multiple American organizations. 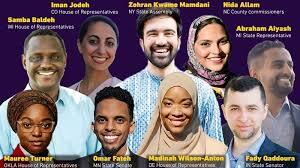 “170 Muslim candidates were on the ballot this election cycle, running in 28 states and Washington DC” said the report done by the Council on American-Islamic Relations (CAIR), the US largest Muslim civil rights and advocacy organization, Jetpac, an organization that trains American Muslims who want to run for office, and MPower Change.

CAIR National Executive Director Nihad Awad said, “This report is a testament to the future of American Muslims in politics. Candidates who ran for political office worked together with a diverse body of coalitions to instill political change in their communities and pursue justice for all.

“Our fight for a more inclusive America does not end here. We will continue to inspire more American Muslims to run for political office and ensure our voices are heard at all levels of government.”

Awad noted that many of the candidates were successful because they built "grassroots campaigns made up of diverse coalitions fighting for a just future in which every Muslim American's civil rights and freedoms can be upheld and protected."

The report also highlights an increasing number of Muslims running for office and winning despite representing only a sliver of the entire American population.