Friday, 11 December 2020_Government leaders, meeting in Brussels, have adopted proposals aimed at trying to avert chaos at EU-UK borders in the event that Britain abruptly exits the bloc's rules and regulations at the end of this month when the Brexit transition period ends on the 31st of December. This, as floundering trade talks between both sides continue. 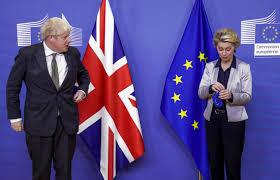 France has made it clear it will veto any EU-UK trade agreement that does not safeguard the livelihoods of those involved in the French fishing industry. The big sticking point for Germany is ensuring that British firms do not have unfair advantage over EU firms, for example via state subsidies.

Those consequences might include very restricted travel to the EU from the UK, from January the 1st, due to the 27-nation bloc's COVID-19 rules with respect to non members. British citizens living in the EU would likely face all sorts of bureaucracy. Then, of course, there are warnings of dire economic consequences for the UK, and possibly Scottish independence. We are told the key to securing a EU-UK future relationship agreement, to avoid chaos in January, is fairness.

Even in the absence of a trade deal with the UK, EU leaders know they already face many economic challenges. The prospects aren't looking good. As EU leaders continued their meeting in the Belgian capital, British Prime Minister Boris Johnson stated there is a "strong possibility" a trade deal will not be reached.

Share to
Related News
Barnier: Both EU and UK Must Be Entitled to Set Own Laws, Control Own Waters
Tags
Brexit ، crisis ، relations
Your Comment