Wednesday, 16 December 2020_The US state of California has ordered thousands of body bags and mobile morgues amid the increasing number of COVID-19 cases there. 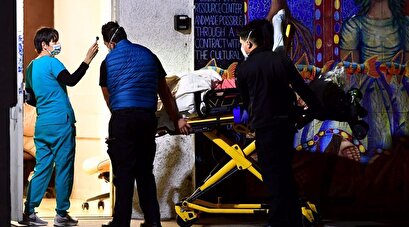 It also put dozens of refrigerated storage units on standby as it prepares to deal with a growing death toll from the fatal disease.

Gov. Gavin Newsom said the fact that 5,000 body bags were ordered and 60 53-foot-long refrigerated units were ready for counties and hospitals should be a sobering statistic.

"There is light at the end of the tunnel, but we're still in the tunnel," he said at a news conference Tuesday. "And that means we're going through perhaps the most intense and urgent moment since the beginning of this pandemic."

He called on Californians to follow health guidelines by wearing masks and keeping their distance from others in order to help slow the spread of the coronavirus.

"I want to remind folks: It's not the flu. This is not something to trifle with," Newsom said. "This is a deadly disease, a deadly pandemic, and we're in the middle of it right now."

Newsom said that the crisis is far from over despite the fact that vaccines have begun to arrive.

The Democratic governor said the state expects to have 2.1 million doses by the end of December.

Around 32,300 new cases are reported across the state each day and currently large parts of the state are under stay-at-home orders.

Across the country, an average of over 961 virus-related deaths per day has been reported since Feb. 6, according to CNN.

The number of deaths in the country swelled past 300,000 on Monday, the same day front-line health care workers received the first Pfizer-BioNTech COVID-19 vaccine inoculations.

And by Tuesday evening, over 16.7 million cases were confirmed nationwide, and more than 304,000 people have died, according to an NBC News count of reports.

Meanwhile, the administration of outgoing President Donald Trump is negotiating a deal to make it possible to free up supplies of raw materials to help Pfizer produce tens of millions of further doses of its Covid-19 vaccine for Americans in the first half of next year.