Monday, 21 December 2020 _A nationwide car protest of a Spanish education reform reached Barcelona as the country grappled with the Coronavirus pandemic. 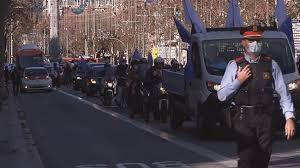 The procession organised by a group advocating bilingual teaching in Catalonia blocked traffic to draw attention to a law that will eliminate Spanish as a "vehicular language" in education. The reform, known as the Celaà Law, in reference to Spain's education minister Isabel Celaà, was approved by a majority of left-leaning lawmakers in Spain's Congress of deputies in November.

It was hailed as a major breakthrough in promoting equal opportunity in public and concerted schools, increasing funding and access to scholarships and ending sex segregation but the main bone of contention is the future of Spanish as common language across the 17 autonomous regions.

The deadlock over school reform takes special significance here in Catalonia, where the independence drive has been gathering pace. Although Spanish is not the main language in most schools in this autonomous region, opponents of the reform say consecrating a law that scraps Spanish as common language ends their hopes for equality and emboldens the separatists.

On Thursday, Catalonia's Superior Court of Justice stepped in the debate arguing that the teaching of Spanish in the region remains "residual" and urged authorities to teach a minimum 25% of the curriculum in Spanish, in addition to Spanish class.

Education officials in Catalonia denounced the move as a breach of regional competencies and vowed to appeal to Spain's higher court. Spain's conservative People's Party, center-right Ciudadanos and far right party Vox have so far failed to slow-walk the bill in its journey to final approval in the Senate.