MOSCOW, September 6 (Itar-Tass) - The chairman of the State Duma's international affairs committee Alexey Pushkov believes that the deployment of a "spearhead" rapid reaction force of NATO in Polish territory would be an unfriendly act towards Russia. 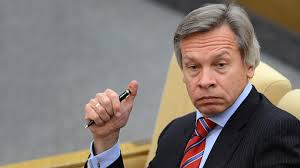 "The context where this attack group may be created and the areas of its deployment - most probably, Poland - looks as an unfriendly act towards Russia. Even more than unfriendly," Pushkov said on the Rossiya-24 round-the-clock television news channel.

It is clear to one and all that Russia does not pose any threat to NATO.

"We have not issued just one signal of the sort," he said.

"The obvious intention is to scare Russia, to deter Russia, although it shows no aggressive intentions against Europe or the European countries," he said.

Pushkov believes that it would be far more logical to deploy such a rapid reaction force in the south of Europe, for instance, in Turkey.

Also, Pushkov has strong doubts the United States may go as far as opening its military bases in the territory of Ukraine.

Theoretically that can be done "on the bilateral basis," without asking for consent from the other member-countries. But that would be an outright challenge to Russia, so such a move was very unlikely.

"There are no threats to the United States coming from Russia, while US military infrastructures near Russia would deal a 'colossal blow' on long-term Russian-US relations," warned.
Share to
Related News
US and EU failed to impose ‘pet president’ on Russia, says Duma speaker
Tags
NATO ، Rapid reaction force ، Russia ، Pushkov
Your Comment