DC residents get tested for COVID-19 after the Christmas holiday

Tuesday, 29 December 2020 _Residents of Washington DC lineup to get tested for COVID-19 after the Christmas holiday. The United States surged past 19 million confirmed coronavirus infections on Sunday, adding a million cases in less than a week. 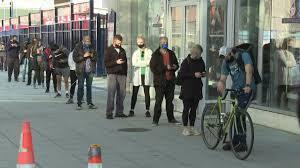 With the pandemic out of control in the United States, the nation's precarious coronavirus testing system is starting to strain again.

Long lines are again forming in some places as the surge of infections drives a surge in demand for testing. Testing companies, lab directors and testing policy experts warn that waiting times for results could soon start to lengthen. In fact, one of the largest commercial testing companies Tuesday reported turnaround times had already started creeping up.

"We're still far behind where we need to be with testing. And as these cases skyrocket, the need for tests are far outpacing what we have," says Heather Pierce, senior director for science policy and regulatory counsel at the Association of American Medical Colleges.

Testing shortages have hobbled the nation's ability to fight the pandemic since it began. But testing improved significantly since the spring, when tests were scarce and waiting times were often long. Tests are now accessible at many locations, including doctors' offices, clinics, fire stations, drive-through test sites, and grocery and drug stores. People can even drop a sample of spit into the mail to find out if they're infected.

More than 167 million tests have been conducted in the U.S. and more than 1.4 million tests were done daily on average in November, according to data gathered by The Covid Tracking Project. That's up from just over 800,000 on average per day in September.

But even the current level of testing is far less than what many experts say is needed. And even though people can sometimes get their results within minutes, many still have to wait at least two days or more, which is still too long to make sure they don't spread the virus to other people. The lack of enough quick testing is probably one of the reasons driving the surge, experts say.

"We have come a long way," says Mara Aspinall, a professor of biomedical diagnostics at Arizona State University. "But testing is not broadly available everywhere in the country.

Despite the federal government's continued efforts to ship millions of swabs and vials and other testing supplies to states, half of labs are reporting shortages of test kits and two-thirds are reporting shortages of crucial chemicals and other supplies, such as like plastic tips for devices called pipettes. So labs still scramble every day, lab directors report. And they say the shortages are intensifying, especially for pipette tips and some test kits.