GUATEMALA CITY, Sept 07, 2014 (AFP) - They stick out like a sore thumb in the steamy bustle of Guatemala's capital: 230 ultra-Orthodox Jews, some speaking broken Spanish and eking out a makeshift living in a decrepit office building. 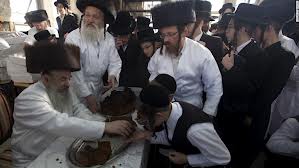 They had been residing in a Mayan Indian village until Thursday, when they were abruptly forced out in a culture and religious clash.

Now these people from a variety of countries such as the United States, Israel, Britain and Russia are looking for a place to settle anew. But they want to stay in this Central American nation.

"We will remain in Guatemala because the seed is fertile and it has to germinate," Rabbi Uriel Goldman said in the lobby of the building he now calls home.

Around him were two beds, a bag of dirty laundry and an old washing machine.

The 30-odd families' departure from the Indian village of San Juan La Laguna, 200 kilometers (120 miles) west of the capital, where they had been living for six years, has forced them to take up in a dilapidated six-story building that is not apt for residential life.

"It is an uncomfortable building, especially for children and women, because it was designed for offices, not for living," said Goldman, a tall, robust man dressed in a black suit and white shirt and sporting a long, thick beard.

To spare his people from having to go out to buy food -- some do not speak Spanish well -- the community has set up a makeshift mini-mart on the first floor of the building.

Seated on an old wooden bench, the rabbi said the group will spend about six months in Guatemala City, where rampant crime and violence stands in stark contrast to the quiet and peaceful life they enjoyed in the lakeside village.

"We are going to look for a place where we can build the community's homes," Goldman said in fluent Spanish. He was born in Israel but holds US nationality and speaks four languages.

He said his people are receiving economic aid from Jewish communities in other countries, but would not say which ones.

"Here, no one has more than anyone else. We all have the same, and on rest days, we all eat the same thing," said Israel Abraham, a Guatemalan who converted to Judaism 12 years ago.

Dressed in black, the women wear veils and the men have beards and the ringlets of hair that are traditional for ultra-Orthodox Jews.

The families have large numbers of children and homeschool them with teachers of their own.

One criticism the group receives is the way they educate their kids. To show it works, Abraham calls out to his six-year-old son Akiva and has him read -- first in Hebrew and then in Spanish.

"Education is vital for the soul," said another member of the community, Misael Santos, as his cell phone rang. It is one of few gadgets the community allows. They do not watch TV.

Goldman has 10 children and three grandchildren. Santos has four, while Abraham has three and one on the way.

- Back and forth accusations -
==============================
Speaking with a calm voice, Goldman says he and his people have no hard feelings toward the council of indigenous elders and municipal officials who expelled them from the village. But they do not want to go back.

The indigenous leaders accused the Jewish group of not respecting local culture and customs, of not being friendly to local Guatemalans and not believing in Jesus or the Virgin Mary.

They also allegedly bathed naked in Lake Atitlan, scaring away tourists. But Goldman denied the claim.

"For us, the body is sacred, and women uncover only their face. How could we swim in the nude? It goes against our beliefs," he said.

He said it all started with a religious conflict that turned political when the mayor of the village backed the council of indigenous elders as a way to win over voters in elections next year.

Santos said a small group of Jews settled in San Juan La Laguna because it was so peaceful. But things changed when more members started arriving from Britain, Canada, Israel, Russia and the United States.

Goldman suspects that leaders of the indigenous community saw the Jews' presence as a threat to their culture and traditions.

Sociologist Marco Garabito said one factor in the expulsion was the fact that the indigenous people -- 42 percent of the country's population of 15 million, although they insist the proportion is 60 percent -- have historically been marginalized.
Share to
Tags
Orthodox ، Jews ، Guatemala ، San Juan
Your Comment