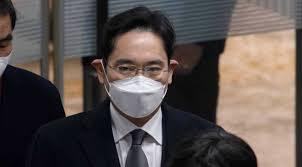 In a huge scandal that unfolded in 2016, the disgraced South Korean president was convicted of charges including illegally receiving funds from the country's spy agency, bribery, coercion and abuse of power. She was sentenced to a total of 32 years in prison, and ordered to pay $17 million in fines.

Park's scandal entangled Lee, who is the heir to the South Korean tech giant, Samsung Group.

He was handed five years in 2017 in connection to the far-reaching scandal, which caused public outrage and mass protests across the country.

Lee's initial five-year sentence was reduced and suspended on appeal, and he was released in 2018 after serving just one year of his prison sentence.

The court convicted Lee for bribery, embezzlement and concealment of criminal proceeds worth about $7.8 million.

Lee, however, maintained that there had been no wrongdoings on his part.

Lee's lawyers have blamed the former president for the charges raised against Park.

“The nature of this case is the former president’s abuse of power violating corporate freedom and property rights. Given that nature, the court’s decision is regrettable,” Lee’s lawyer, Lee In-jae, told reporters.