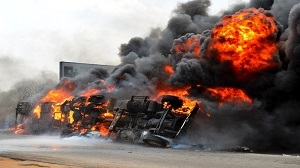 A tanker explosion in southern Nigeria has killed a woman and three children while severely burning 11 others, an official said Saturday, the latest in a series of such incidents in the West African nation.

The tanker was delivering gas to a station in Agbor in Nigeria’s Delta state, said state governor Ifeanyi Okowa.

The injured had burns covering 80 to 90 percent of their bodies, while several vehicles were also destroyed and nearby homes were damaged.

“It was an unfortunate fire incident involving a gas station where the tanker was trying to discharge gas,” Okowa said in a statement.

“Obviously it’s a sad situation and we thank God that this one wasn’t close to a densely populated area, otherwise the damage would have been more.”

Explosions involving tankers and pipelines occur regularly in Nigeria, Africa’s largest oil producer but where infrastructure is lacking and most of its 200 million citizens live in poverty.