Sunday, 24 January 2021 _Far-right and white supremacist extremists have been actively recruiting in the US military, the Department of Defense has acknowledged, announcing an investigation into the extent of extremist ideologies among active-duty personnel. 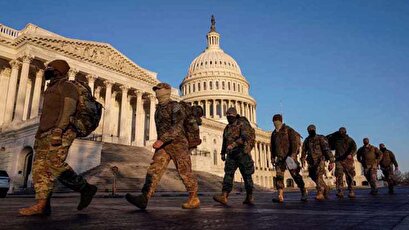 Concern about extremism in military ranks spiked after numerous people who took part in the violent attack on the US Capitol last week were found to be active military personnel and veterans. Several military veterans were arrested in connection with the unprecedented riot, that was incited by President Donald Trump and left five people dead.

An Army Special Forces officer is under investigation for appearing on the Capitol grounds on January 6 when the attack took place. One military captain, a psychological operations specialist in North Carolina, is also suspected of organizing a group of 100 Trump supporters to join the riot.

The Pentagon’s internal watchdog said on Thursday that it was launching an investigation this month to ascertain whether the military is doing enough to snuff out extremism from within its ranks.

The announcement came after more than a dozen Democratic senators, led by Connecticut Senator Richard Blumenthal, called on the Defense Department to look into the prevalence of white supremacy in the US military.

“The issue of white supremacy and extremist ideology within the ranks of our military is not new, but the attack on the Capitol makes clear this alarming trend must be immediately addressed,” the senators wrote in a letter to the Pentagon’s acting inspector general, Sean O’Donnell.

The objective of the investigation is to determine the extent to which the military services have implemented policies that prohibit active military personnel from engaging in “supremacist, extremist, or criminal gang doctrine, ideology, or causes,” said Carolyn Hantz, the Pentagon’s assistant inspector general for evaluations programs.

A senior Pentagon official, who was not authorized to speak publicly, acknowledged in call to reporters that there was an increase in extremist activity and ideology in the military ranks, especially over the past year.

“We know that some groups actively attempt to recruit our personnel into their cause, or actually encourage their members to join the military for the purpose of acquiring skills and experience our military force,” the official told reporters.

“We recognize that those skills are prized by some of these groups, not only for the capability it offers them, but it also brings legitimacy in their mind to their cause.”

Law enforcement authorities are preparing for potentially more violence ahead of President-elect Joe Biden’s inauguration on Wednesday. Officials fear that extremists online are attempting to organize rallies to disrupt the event.