Monday, 25 January 2021_Protesters across the Netherlands have clashed with police, looted stores, and set fires in massive demonstrations against tougher COVID-19 restrictions, leading to the arrest of nearly 260 people. 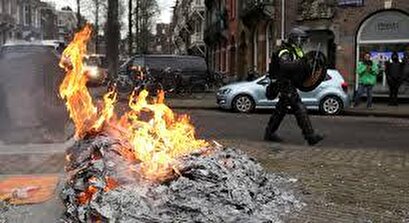 The unusually violent protest actions on Sunday came on the second day of newly-implemented, strict coronavirus limitations, including a night curfew, which had triggered what the Dutch police and media outlets described as riots.

Police forces in the nation’s capital of Amsterdam resorted water cannons, dogs and mounted officers to disperse a huge protest in the city center Sunday afternoon, according to eye-witnesses.

Nearly 200 protesters during the Amsterdam unrest were taken into custody, police authorities announced, charging them with throwing stones and fireworks.

According to national broadcaster NOS, riot police were deployed in at least 10 cities and towns throughout the country after a curfew went into effect at 9pm local time on Saturday.

This is while Dutch military police further stated in a Twitter post late Sunday that they were supporting local police forces in at least two cities south of the country.

Moreover, Dutch television broadcast images showing groups of youths looting shops, throwing bicycles and setting fires in the southern city of Eindhoven, where at least 55 protesters were arrested, according to a statement issued by local authorities.

The protest rally in the city's Museum Square, which violated a ban on public gatherings, followed government imposition -- a day earlier -- of a nightly curfew for the first time since World War II.