Canada’s parliament has approved a motion calling on the government to formally designate an American group that supports former US president Donald Trump as a terrorist entity, alongside outfits like al-Qaeda and Daesh. 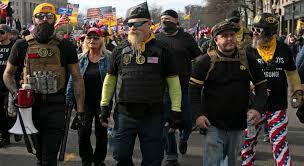 Canadian lawmakers unanimously passed a motion on Monday that called on the government of Prime Minister Justin Trudeau to declare as a banned terrorist group the so-called Proud Boys, a white supremacist group and one of the staunchest supporters of Trump.

It urges the government to “use all available tools to address the proliferation of white supremacists and hate groups starting with immediately designating the Proud Boys as a terrorist entity.”

Although the move is symbolic, Trudeau’s government said authorities were monitoring the Proud Boys and collecting evidence that could support designation.

A spokeswoman for Public Safety Minister Bill Blair said that security and law enforcement agencies were “very actively engaged in monitoring the activities of these groups.” According to Mary-Liz Power, authorities are “gathering the evidence required to support a determination of listing as a Terrorist Organization.”