US opposes Iran's presence at French-hosted conference on Iraq

U.S. Secretary of State John Kerry said on Friday it was "not appropriate" for Iran to join talks on confronting Islamic State militants, as he appeared to play down how fast countries can commit to force or other steps in an emerging coalition. 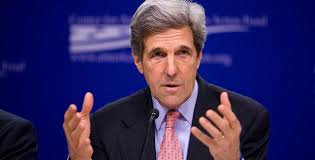 Kerry met Turkish leaders to try to secure backing for U.S.-led action against Islamic State militants, but Ankara’s reluctance to play a frontline role highlighted the difficulty of building a willing coalition for a complex military campaign in the heart of the Middle East.

As he tours the region to gather support for President Barack Obama’s plan to strike both sides of the Syrian-Iraqi frontier to defeat Islamic State Sunni fighters, Kerry said Shi’ite Iran should have no role in talks on how to go about it.

Accusing Iran of being "a state sponsor of terror” and backing Syria’s brutal regime, Kerry said it would be inappropriate for Iranian officials to join an Iraq conference in Paris on Monday to discuss how to curb a jihadist movement that has seized a third of both Iraq and Syria. Tehran has described the coalition as "shrouded in serious ambiguities”.

"Under the circumstances, at this moment in time, it would not be right for any number of reasons. It would not be appropriate given the many other issues that are on the table in Syria and elsewhere,” he told a news conference in the Turkish capital Ankara.

Faced with disparate interests and goals among the region’s often squabbling nations, Kerry said it was too early to say publicly what individual countries were prepared to do in a broad front to cut off funds to the militants, encourage local opposition and provide humanitarian aid.

But it remains far from clear what role individual nations will play. While he confirmed France’s commitment to use military force in Iraq, he declined to say whether Francewould join strikes in Syria.

That follows conflicting reports in key ally Britain over its potential role, with Prime Minister David Cameron on Thursday saying he has not ruled out military action in Syria after his foreign secretary said Britain would not take part in any air strikes there.

"It is entirely premature and frankly inappropriate at this point in time to start laying out one country by one country what individual nations are going to do,” said Kerry, who travels to Cairo on Saturday, adding that building a coalition would take time.

"I’m comfortable that this will be a broad-based coalition with Arab nations, European nations, the United States, others,” he said. "At the appropriate time, every role will be laid out in detail.”

Turkey, which has the second-largest armed forces in the NATO military alliance after the United States and hosts a major U.S. Air Force base at Incirlik in its south, has so far conspicuously avoided committing to any military campaign.

Prime Minister Ahmet Davutoglu, who did not join the news conference with Kerry, said in a live interview on Turkish television hours after their meeting that U.S. action in Iraq would not be enough on its own to bring political stability.

"It is necessary, but it is not enough to establish order,” he told the Kanal 24 TV station.

U.S. officials played down hopes of persuading Ankara to take a significant role in any military involvement, saying Friday’s talks were focused on issues including Turkey’s efforts to stem the flow of foreign fighters crossing its territory and its role in providing humanitarian assistance.

"The Turks have played an extraordinary role on humanitarian aspects of the situation ... and they are going to play and have been playing a pivotal role in our efforts to crack down on foreign fighter facilitation and counter terrorist finance,” a senior U.S. State Department official said before the talks.

Obama’s plan to fight Islamic State simultaneously in Iraq and Syria thrusts the United States directly into the midst of two different wars, in which nearly every country in the region has a stake, alliances have shifted and strategy is dominated by Islam’s 1,300-year-old rift between Sunnis and Shi’ites.

Islamic State is made up of Sunni militants, who are fighting against a Shi’ite-led government in Iraq and a government in Syria led by members of a Shi’ite offshoot sect. It also battles against rival Sunni Islamists and more moderate Sunni groups in Syria, and Kurds on both sides of the border.

From the early days of the Syrian conflict, Turkey has backed mainly Sunni rebels fighting against President Bashar al-Assad. Although it is alarmed by Islamic State’s rise, Turkey is wary about any military action that might weaken Assad’s foes.

It is also concerned about strengthening Kurds in Iraq and Syria. Turkey’s own Kurdish militants waged a three-decade insurgency against the Turkish state and are engaged in a delicate peace process.

Lebanese Foreign Minister Gebran Bassil told Reuters some Arab states at talks in Jeddah on Thursday had proposed expanding the campaign to fight other Islamist groups besides Islamic State, a move Turkey would also probably oppose.

Turkey’s support for the rebels fighting Assad, including groups that some Western allies balked at backing, has laid it open to accusations it aided radical Islamists and contributed to Islamic State’s rise, a notion Ankara strongly rejects.

Francis Ricciardone, who was until late June the U.S. ambassador in Turkey, said on Thursday Ankara had supported groups including the Nusra Front, al Qaeda’s Syrian branch, in the fight against Assad, much to the dismay of Washington.
"We ultimately had no choice but to agree to disagree,” Ricciardone told a conference call arranged by the Atlantic Council think-tank on Thursday, in comments highlighting the challenges of building a coalition.

"The Turks frankly worked with groups for a period, including al Nusra, whom we finally designated as we’re not willing to work with,” he said.
(Reuters)
Share to
Tags
Iran ، US ، France ، al Nusra ، Turkey
Your Comment