Wednesday, 24 February 2021_The three European signatories to the 2015 nuclear deal, known as the E3, have expressed regret over Iran’s decision to cease the voluntary implementation of the Additional Protocol to the Non-Proliferation Treaty (NPT) Safeguards Agreement. 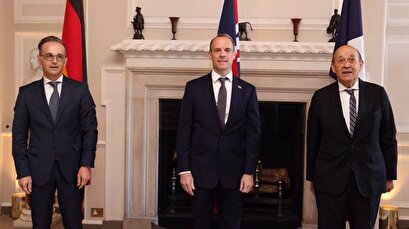 In a joint statement released on Tuesday, France, Germany and Britain claimed that Iran’s actions are “a further violation” of the Joint Comprehensive Plan of Action (JCPOA) and “significantly reduce safeguards oversight” by the International Atomic Energy Agency (IAEA).

“We, the Foreign Ministers of France, Germany and the United Kingdom, deeply regret that Iran has started, as of today, to suspend the Additional Protocol and the transparency measures,” the statement read.

“The E3 are united in underlining the dangerous nature of this decision. It will significantly constrain the IAEA’s access to sites and to safeguards-relevant information. It will also constrain the IAEA’s ability to monitor and verify Iran’s nuclear programme and nuclear-related activities, as per its reporting mandate under United Nations Security Council resolution 2231,” it added.

At midnight on Monday, Iran stopped the voluntary implementation of the Additional Protocol that allowed the IAEA to carry out short-notice inspections of the country’s nuclear facilities.

The halt came under the Strategic Action Plan to Counter Sanctions, a law passed last December by the Iranian Parliament.

The legislation set February 23 as a deadline for the Iranian government to further scale back compliance with the JCPOA, if the US does not lift its sanctions against the Islamic Republic.

The withdrawal from the Protocol adds to Iran’s previous steps away from the nuclear accord in response to the US’s unilateral withdrawal in 2018 and the other parties’ failure to fulfill their commitments.

It followed an agreement between the IAEA and the Atomic Energy Organization of Iran (AEOI), under which the latter would continue to use cameras to record information at its nuclear sites for three months, but it would retain the information exclusively. If the US sanctions are lifted completely within that period, Iran will provide the footage information to the UN nuclear watchdog, otherwise it will be deleted forever.

Elsewhere in their statement, the European trio took note of the temporary bilateral understanding between the IAEA and Iran which preserves for up to three months the possibility of access to certain information.

“We urge Iran to stop and reverse all measures that reduce transparency and to ensure full and timely cooperation with the IAEA. Our objective remains to preserve the JCPOA and to support ongoing diplomatic efforts for a negotiated solution allowing for the return of Iran and the US to full compliance with their JCPOA commitments,” they added.

Separately on Tuesday, EU foreign policy chief Josep Borrell said Tehran had not violated the JCPOA before Washington withdrew from it, adding that bringing both sides back into compliance with the pact is “going to be possible.”

Speaking virtually to the Atlantic Council, Borrell also stressed that he is working hard to arrange a meeting for all the parties involved in order to “greenlight” the return to the deal.

Reviving the JCPOA is “the most urgent and important” diplomatic priority in US-European relations, he said, noting that both Iranian compliance and US sanctions relief are needed for the deal to go back into effect.

The top EU diplomat further rejected efforts to expand the JCPOA beyond its current scope, warning that adding other issues to the accord would “block the process” to save it.

“The JCPOA, it is what it is. Maybe there are other issues that have to be taken into consideration. But don’t put everything together,” Borrell said. “For us, the Europeans, the Iran nuclear deal, it’s a triumph of diplomacy, and we are very proud of it.”

In a post on his twitter account, Russia’s Permanent Representative to the International Organizations in Vienna Mikhail Ulyanov said he hopes that Iran would soon resume implementing the Additional Protocol under a fully enforced nuclear deal.

Pursuant to national law #Iran suspended Additional Protocol today. Let’s hope that the suspension will not last long and provisional application of this important verification tool will resume soon in the context of political efforts to restore full implementation of #JCPOA.