Wednesday, 24 February 2021_More than 6,500 migrant workers from five labor-sending South Asian countries have reportedly died in Qatar ever since the Persian Gulf kingdom won the right to host the 2022 FIFA World Cup nearly a decade ago. 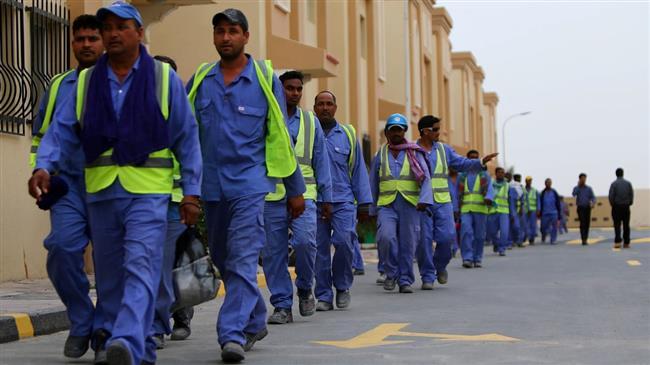 British daily newspaper The Guardian, citing findings compiled from a range of government sources, reported on Tuesday that the figure means an average of 12 migrant workers from India, Pakistan, Nepal, Bangladesh and Sri Lanka have died each week in Qatar.

The report said thousands of migrant Asian workers have died in unexplained or dubious circumstances – often listed as “natural deaths” – while working in Qatar in the last decade.

It said 69% of the deaths among Indian, Nepali and Bangladeshi workers are categorized as natural, while the figure is 80% among Indians alone.

Based on the data from India, Bangladesh, Nepal and Sri Lanka, 5,927 migrant workers lost their lives in Qatar between 2011 and 2020.

Separately, Pakistan’s embassy in Doha reported there were a further 824 deaths of Pakistani workers in the period 2010–2020.

The Guardian further revealed that Ghal Singh Rai from Nepal paid nearly £1,000 ($1,418) in recruitment fees for his job as a cleaner in a camp for workers building the Education City World Cup stadium. He killed himself within a week of arriving in Qatar.

Another worker, Mohammad Shahid Miah, from Bangladesh, was electrocuted in his worker accommodation after water came into contact with exposed electricity cables.

In India, the family of Madhu Bollapally have never understood how the healthy 43-year old died of “natural causes” while working in Qatar. His body was found lying on his dorm room floor.

The Guardian highlighted what it described the lack of transparency, rigor and details in recording deaths in Qatar.

The daily newspaper said embassies in Doha and governments in labor-sending countries are apparently reluctant to share the data, possibly for political reasons.