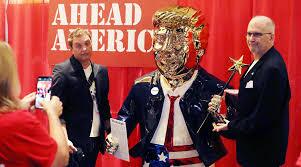 Delegates on Friday evening posed for pictures beside the “Golden Trump,” a more than 6-foot-tall fiberglass mold statue of the former president painted in gold.

“This (conference) is conservative, and conservatives are for Trump,” said Tommy Zegan, a California-based artist who has created the Trump statue.

Delegates said they were looking forward to the Trump speech that closes the four-day conference on Sunday, his first public appearance since his presidency ended on January 20.

“I think the main message here is, it's not about one individual,” Michelle Heldmyer, 59, a retired attorney from Florida, was quoted as saying by USA Today. “It's about the Constitution, it's about freedom, it's about taking our country back,” she said, adding, “Trump has just epitomized that better than others.”

Political analysts said this year’s CPAC -- the nation's gathering of conservative activists and GOP figures-- has already focused on the Republican 2024 presidential primary with Trump being front and center.

The conference also seems to have sold out well to Trump’s conservative base, despite the former president’s election loss and second impeachment for inciting the January 6 insurrection at the US Capitol.

“They had a chance to move forward after 1/6, but Republican voters want Trump,” said Tim Miller, a former GOP strategist who has left the party, according to USA Today. “And rather than try to counter that, Republicans have chosen submission and erected a Trump golden idol.”

Trump’s final weeks in office saw his supporters launch a deadly attack on the US Capitol on January 6 as Congress was certifying Democratic President Joe Biden’s election victory that Trump has claimed was tainted by widespread fraud.

Prominent congressional conservatives - including Senators Ted Cruz, Tom Cotton and Josh Hawley and Representatives Steve Scalise and Matt Gaetz - were among the Trump loyalists speaking at the annual gathering in Orlando, Florida.