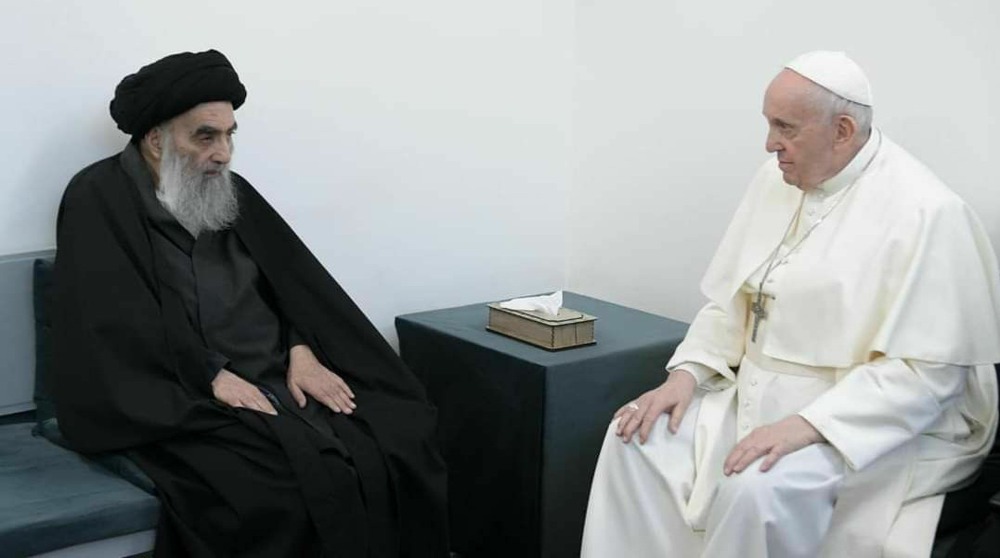 The meeting took place at Ayatollah Sistani’s residence in the holy city of Najaf on Saturday morning.

The office of Ayatollah Sistani said in a statement that he highlighted challenges facing mankind and stressed the role of belief in God and commitment to high moral values ​​in overcoming them.

Ayatollah Sistani touched on injustice, oppression, poverty, religious persecution, repression of fundamental freedoms, wars, violence, economic siege and displacement of many people in the region, especially the Palestinians in the occupied territories, the statement read.

He further touched on the role of great religious and spiritual leaders in containing catastrophes, it added.

Ayatollah Sistani said the religious leaders have to encourage the involved parties to conflicts, particularly the world powers, to prioritize rationality instead of confrontation.

The Shia cleric, the statement said, stressed the importance of efforts to strengthen peaceful coexistence and humanitarian solidarity in all societies based on mutual respect among the followers of different religions and intellectual factions.

Ayatollah Sistani emphasized that the Christian citizens, like all the Iraqis, should live in security and peace in full accordance with their fundamental rights.

He also referred to the role played by the religious authority in protecting the Christians and all those who suffered from the terrorists’ criminal acts over the past years.

After the one-hour meeting, Pope Francis travelled to the Iraqi city of Ur, which tradition holds as the birthplace of Prophet Abraham (PBUH), father of Judaism, Christianity and Islam.

The pontiff arrived in Iraq on Friday for a three day trip amid concerns about the coronavirus pandemic. In addition to Ayatollah Sistani, Pope Francis has so far met with Iraqi Prime Minister Mustafa al-Kadhimi and President Barham Salih.

Before the trip, the Vatican said the pope’ visit to Iraq will be socially distanced devoid of the usual fanfare and celebrations.

“No more than a few hundred people, distanced” would be gathered to see him to minimize the risks, said Vatican spokesman Matteo Bruni.