Monday, 08 March 2021 _Moscow says it is prepared to engage with the United States and other parties to the 2015 nuclear deal with Iran in restoring full compliance with the JCPOA in the shortest time possible. 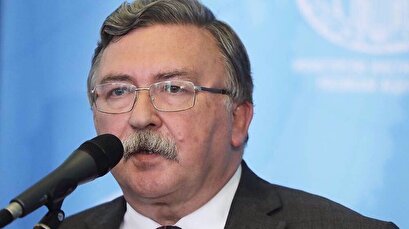 “Welcome, dear US colleagues! Russia is ready to engage with you and all other JCPOA participants in order to restore full compliance with the nuclear deal as soon as possible,” said Russia's Permanent Representative to the International Organizations in Vienna Mikhail Ulyanov in a tweet on Sunday evening.

And this voluntary restrictions are temporary. According to JCPOA they are aimed at restoration of confidence in exclusively peaceful nature of the Iranian nuclear programme. But in real life-you are right- this aim can be misinterpreted.

The Russian envoy made the remarks in reaction to a tweet by the US mission to Vienna-based international organizations, in which it said, “The United States, in close coordination with our allies and partners, is ready to reengage in meaningful diplomacy to achieve a mutual return to compliance with the JCPOA, a key achievement of multilateral diplomacy.”

The United States, in close coordination with our allies and partners, is ready to reengage in meaningful diplomacy to achieve a mutual return to compliance with the JCPOA, a key achievement of multilateral diplomacy. @StateISN @State_IO

In his Sunday tweet, Ulyanov underlined that the “voluntary restrictions” imposed against Iran’s peaceful nuclear program in the JCPOA “are temporary”.

“According to JCPOA they [restrictions] are aimed at restoration of confidence in exclusively peaceful nature of the Iranian nuclear program. But in real life-you are right- this aim can be misinterpreted,” he added.

Earlier in the day, Ulyanov had hailed the move by the three European signatories to the JCPOA to drop their previous decision to adopt a "strange" resolution against Iran at the International Atomic Energy Agency'(IAEA)'s Board of Governors as a sign of "common sense".

"A lot of negative information is floating around. But the reality isn’t as bad as one can think," Mikhail Ulyanov, the Russian ambassador to international organizations in Vienna, said in a post on his Twitter account.

In comments on Sunday, the foreign minister of China, another party to the JCPOA, urged the United States to demonstrate good faith and remove ‘unjustifiable’ sanctions it has imposed on Iran as quickly as possible in order to save the multilateral nuclear deal of 2015.

Wang Yi criticized the US for its unilateral withdrawal in 2018 from the nuclear agreement signed between Iran and the five permanent members of the UN Security Council – officially known as the Joint Comprehensive Plan of Action (JCPOA) – and its so-called ‘maximum pressure’ campaign against Iran.

The Chinese foreign minister also called on Iran to resume full compliance with the JCPOA and take up its responsibilities of nuclear non-proliferation.

He said both Tehran and Washington can “move forward according to the principle of synchronized and reciprocal steps.”

Under his signature “maximum pressure” policy against Iran, former US President Donald Trump withdrew Washington from the landmark accord and restored the economic sanctions that the deal had lifted. The US also began threatening third-party countries with “secondary sanctions” if they did business with Iran in defiance of the bans.

Trump abandoned the deal despite its multilateral nature and the fact that it had been endorsed by the United Nations Security Council in the form of Resolution 2231. Washington's allies in the deal – London, Paris, and Berlin – also bowed to the US pressure, abiding by the sanctions and stopping their trade with Tehran.

Iran, in turn, began confronting the sanctions under the Resistive Economy directive by Leader of the Islamic Revolution Ayatollah Seyyed Ali Khamenei.

It also started a number of nuclear countermeasures on the first anniversary of the US’s withdrawal in line with its rights under the deal to retaliate for the other side’s non-commitment. The Islamic Republic has been gradually increasing its counteractions as Washington and the European trio continues to violate their obligations under the JCPOA.