Wednesday, 17 March 2021_Daily protests have been ongoing for more than a month in Myanmar since the military ousted the civil government and arrested de facto leader Aung Sung Suu Kyi and other political leaders. 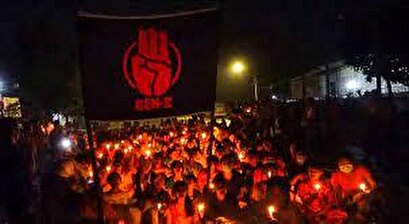 Security forces, made up of police and military personnel, have intensified a brutal crackdown that includes shooting protesters and overnight arrests.

At least 180 people, including children, have been killed since the coup on February 1, according to the United Nations Human Rights Office.

More than 2,100 people have also been detained, often during overnight raids.

Here is the latest:

On Wednesday, Myanmar’s Buddhist monks’ association called on the junta to end the violence against protesters.

The government-appointed organization said in a draft statement that its members intended to halt activities in an apparent protest.

The Mahana is set to release a final statement after consulting the religious affairs minister on Thursday, the Myanmar Now news portal reported, citing a monk who attended a meeting of the committee.

Buddhist monks were at the forefront of a 2007 “Saffron Revolution” against military rule, an uprising that, though suppressed, ultimately helped usher in civilian rule.

Myanmar spent almost half a century under military rule until democratic reforms in 2011.

The military seized power once again on February 1 and declared a one-year emergency across Myanmar.

The international community has repeatedly called for the release of the detained leaders and urged the restoration of the civilian government. It has also urged the junta to stop the use of lethal force against the anti-coup protests.

The military regime has, however, defied global calls for restraint and maintained its use of lethal force.

On Tuesday night, security forces killed a 28-year-old man in the commercial capital of Yangon, a brother of the victim said.