Thousands of Yemeni patients on verge of death

Friday, 19 March 2021_Humanitarian activists have held an event in Yemen’s capital, Sana’a, where the representatives of international organizations called on the international community to help end the suffering of the patients in the conflict-ridden country. 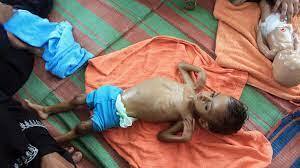 "Put an end to the suffering of our patients” is the motto of an event held by the humanitarian campaign in the Yemeni capital, aimed at bringing the state officials and representatives of different international organizations together, all amid the deteriorating humanitarian crisis in the country.

The participants called on the international community to step in and save the lives of thousands of patients who are on the verge of death, following a severe fuel crisis that caused the closure of many health facilities, including dialysis centers and blood banks serving cancer patients in Yemen.

Besides the war, Saudi Arabia is imposing an all-out blockade on the war-torn country and is still illegally holding 13 Yemeni ships, bringing the country to the verge of a harsh fuel shortage.

The lives of thousands of Yemeni patients, including children, are at risk, as more than 1,500 health facilities in the country are expected to be closed very soon. That is because the health sector has been one of the worst-affected Yemeni sectors, following the severe shortage of fuel.