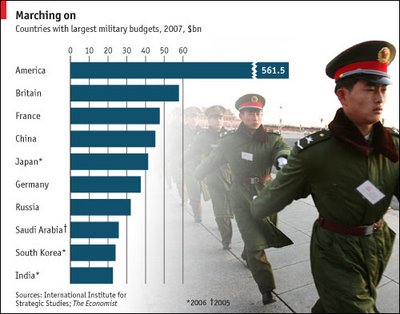 Under the new "results-based management system" set to be fully operational by 2020, individuals and military units will be held accountable for inefficiency, the state-run Xinhua news agency said.

It cited what it described as a "circular approved by the Central Military Commission and made public on Sunday".

Xinhua quoted Zhao Keshi, head of the department, as saying that the system would ensure that military spending effectively goes to improve combat capability.

"The circular said modern warfare is based on huge consumption of money and materials, and cost-output management should always be an important consideration for the military," the report said.

"It urged accurate formulation of military budgets, strengthened monitoring of the budget execution, and strict accountability for those who failed to achieve the goals set."

The system will start on a pilot basis this year at PLA headquarters and regional military commands in five areas including  fiscal management and military hospitals, Xinhua cited the circular as saying.

China announced in March that it plans to spend 808.23 billion yuan ($132 billion now) on the PLA in 2014, up 12.2 percent from the year before and the latest double-digit increase.

Beijing's rising military spending has raised concerns among countries in the Asia-Pacific such as Japan and the Philippines, with which China is embroiled in maritime territorial disputes.

President Xi Jinping has repeatedly urged the armed forces to strengthen their capacity to "win battles".

China insists it poses no threat to any country, but is committed to defending its interests and modernising its armed forces.

News of the plan to increase military spending efficiency comes as Xi wages a campaign to root out widespread corruption in the Communist Party and military, both of which he heads.
Share to
Tags
China ، military ، Japan ، Philippines ، spending
Your Comment