Tehran, YJC. The Iranian president speaking at an economic conference on Sunday said that his administration’s foreign policy asserts relations with the world. 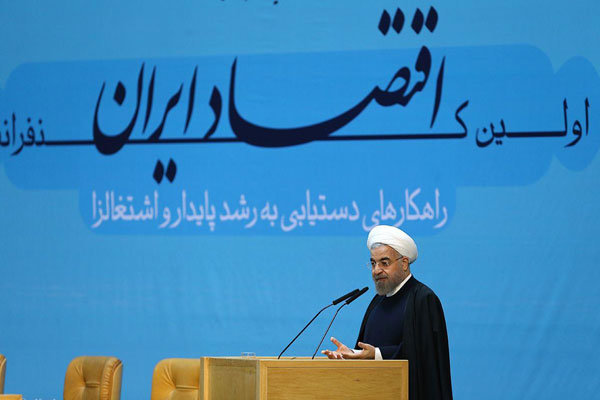 President Hassan Rouhani stated "This does not mean that we want to abandon our basics or ideals. Certain persons are immersed so much in illusions to think that on the [nuclear] negotiations we are going to discuss our principals.”

"We did not make deal on our principals in the Geneva agreement. We talked to them and we made a deal. We had some demands, the same way they had some. The entire talks focus on bridging the gap between our demands and theirs.”

The president asked his government’s critics "Does it challenge our principals if we say that at the moment we wont carry out certain uranium enrichment which we do not momentarily need? Does it challenge our ideals? Our ideals are not bound to the centrifuges, but rather to our brains and our will. So, a movement has started which we will pursue backed by the favor of the public.”

Calling for domestic entities to work hand in hand, he said "Regional and international situations oblige us to be more united. Against all problems, I am optimistic about the future. If the people are unanimously out there at the scene, we will handle the problems.”