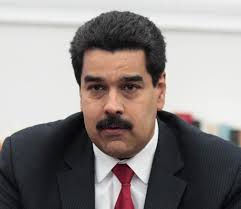 The South American oil giant confirmed Tuesday that it has entered recession, while annual inflation topped 63 percent, exacerbating the outlook for an economy already hit by global crashing oil prices and import shortages.

"It's a very important tour... to tackle new projects to address the circumstances affecting our country, including the depletion of revenues due to plummeting oil prices," Maduro said in a radio and television address from the Miraflores presidential palace.

Maduro had been expected to announce exchange measures to address these issues. Instead, the president announced the creation of a strategic reserve, appointed a new board for the entity that manages currency exchange controls and created new agencies to control the distribution of commodities.

The price of Venezuelan oil has dropped more than 50 percent since June 2014, trading at $46.97 at the end of December.

The fall in prices dramatically reduces the income of Venezuela, which gets 96 percent of its foreign currency from oil exports.

China has already agreed to a $42 billion loan for the Caribbean country, of which it has already paid out $24 billion.

During his visit, Maduro will also participate in the summit between China and the Community of Latin American and Caribbean States, or CELAC, scheduled for January 8 and 9.

The Venezuelan leader will then head to several OPEC countries to "continue making efforts at the highest level for a strategy to recover" oil prices, though he did not specify which countries he would tour or when.

During an OPEC meeting in November, Venezuela made an ultimately unsuccessful lobbying effort to cut output as a way to stem the fall in oil prices.

Maduro, who started 2015 with his lowest popularity rating since he came to power nearly a year ago, announced earlier this week that the government would implement an "economic recovery program," though he declined to address the details of the plan.

Venezuela is estimated to have the largest oil reserves in the world but depends largely on imports for basic goods, including food and medicine.
Share to
Tags
Venezuela ، Maduro ، China ، financial aid
Your Comment