WASHINGTON, Jan 10, 2015 (AFP) - US Secretary of State John Kerry was to leave late Friday for India on his first foreign trip of 2015, with a heavy focus on trade and investment with the South Asian economic giant. 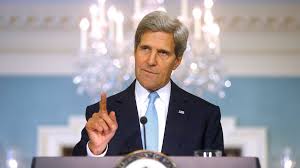 His tour will also take him to Geneva for talks Wednesday with his Iranian counterpart on Iran's nuclear program, before he makes his first visit as the top US diplomat to Bulgaria later in the week.

It will be Kerry's second trip to India in six months, as the two allies have worked to repair ties which frayed badly early last year in a spat over the deportation of an Indian diplomat.

He will also be paving the way for a visit to the South Asian nation by President Barack Obama later this month who will be the country's special guest for the Republic Day celebrations.

En route for India, Kerry will stopover for a few hours in Munich, southern Germany, to meet with Oman's Sultan Qaboos.

State Department spokeswoman Jen Psaki said the Munich talks would be more of "a personal visit" although she acknowledged that Oman played a key role in hosting secret talks in 2012 between Iran and the US credited with bringing the Islamic Republic back to the nuclear negotiations.

The key focus of Kerry's visit to the western Indian city of Ahmadabad will be his address to the Vibrant Gujarat Global Investors Summit hosted by new Indian Prime Minister Narendra Modi.

It is the first time that the United States is joining the conference as a partner country -- a biennial summit first launched in 2003 to attract foreign investment to the area bordering Pakistan.

Two-way trade between the US and India currently stands at $100 billion and the countries aim to boost the figure to $500 billion but have set no deadline.

US officials did not highlight whether any major deals would be outlined during the Gujarat visit.

But the summit will give Kerry the chance to showcase "the vast opportunity for the American private sector" as Modi seeks  to transform India's economy, a senior State Department official said.

"I think the United States is going to be a key player and a key partner in that transformation and rejuvenation of the Indian economy, and that this is a win-win for both countries and for both peoples," the official added.

Kerry will also visit a Ford automotive manufacturing plant which is to be shortly inaugurated in Gujarat.

On the sidelines of the summit, Kerry will hold the a cabinet-level meeting with the remote Himalayan kingdom of Bhutan.

He will meet Bhutanese Prime Minister Tshering Tobgay in bid to strengthen ties with the country, which has remained one of the most isolated in the world.

In Bulgaria next week he will "discuss security cooperation, energy diversification" and bilateral trade, Psaki said.

Kerry would also "highlight the importance of the rule of law to help Bulgaria develop its full potential as a vibrant European democracy."