MUNICH, Germany, Jan 11, 2015 (AFP) - The United States on Saturday slammed an offer by North Korea to suspend future nuclear tests temporarily if Washington cancels military drills with the South as an "implicit threat." 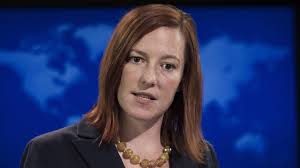 "A new nuclear test would be a clear violation of North Korea's obligations under multiple UN Security Council resolutions," Psaki told reporters travelling with US Secretary of State John Kerry to India during a stopover in Munich.

North Korea's proposal was passed to the US side through a "relevant channel" on Friday, the North's official KCNA news agency said Saturday.

The message called on Washington to help ease tensions on the Korean peninsula by suspending all of this year's joint military exercises in South Korea "and its vicinity".

Should Washington require talks to clarify Pyongyang's new proposal, the North "is ready to sit with the US anytime," the agency said.

But Psaki said the North's statement which "inappropriately links routine US-ROK (South Korea) exercises to the possibility of a nuclear test by North Korea is an implicit threat".

She stressed that Washington "remains open to dialogue with" the North, but talks had to be aimed at "returning to credible and authentic negotiations on the denuclearisation of the Korean Peninsula".

"We call on the DPRK (North) to immediately cease all threats, reduce tensions, and take the necessary steps toward denuclearisation needed to resume credible negotiations," she added.

Source of tension
The United States, which has close to 30,000 troops permanently stationed in South Korea, conducts a series of joint military exercises with its key Asian ally every year.

Psaki said the exercises were "transparent, defence-oriented, and have been carried out regularly and openly for roughly 40 years".

The drills are regularly condemned by Pyongyang as provocative rehearsals for an invasion, however.

The exercises habitually raise tensions between the two Koreas, who remain technically at war after the 1950-53 Korean War concluded with a ceasefire rather than a peace treaty.

Describing the US-South military drills as the "root cause" of tensions on the peninsula, KCNA said their continuation precluded any possibility of dialogue or detente.

North Korea has conducted three nuclear tests -- the last in February 2013 -- and recently threatened a fourth in response to a UN resolution condemning its human rights record.

However, expert analysis of recent commercial satellite images of the North's main underground test site have shown none of the activity associated with a pending detonation.

North Korea perennially demands that the US and South Korea cancel their drills, but analysts said the offer of a quid pro quo on nuclear testing suggested a more pragmatic approach.

Writing this week in the Bulletin of Atomic Scientists, a leading expert on North Korea's nuclear programme, Siegfried Hecker, estimated that the North likely had 12 nuclear weapons, with an annual manufacturing capacity of four to six more devices.

"So, by the time (President Barack Obama) leaves office, North Korea may have conducted another nuclear test and have an arsenal of 20 bombs," Hecker warned.
Share to
Tags
US ، North Korea ، nuclear tests ، Jen Psaki
Your Comment