Ban Ki-moon has strongly condemned a terrorist attack on a UN base in the town of Kidal, which killed a Chadian peacekeeper and wounded four others. 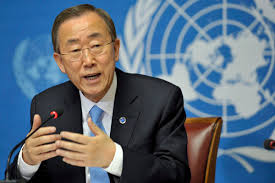 "These attacks will not alter the determination of the United Nations to support the Malian people in its search for peace," said a statement released by the Spokesman for Secretary-General following the latest in a series of armed assaults against UN personnel and contractors in the Kidal and Gao Regions.

"This latest attack only highlights the urgency of reaching a political settlement to end the conflict and enable the full restoration of State authority across the entire Malian territory."

"Such violence against the UN peacekeeping forces is a serious crime and those responsible will be brought to justice," he said. A press statement agreed upon by the Members of the Security Council also underlined that attacks targeting peacekeepers may constitute war crimes under international law.

MINUSMA's press release said the base was attacked shortly before 7.00 am, when a suicide vehicle was detonated near a MINUSMA checkpoint about a kilometre away, killing a peacekeeper and wounding another from the Chadian contingent.

A second vehicle then exploded at one of the base's entrances, while the camp was simultaneously bombarded with at least eight rockets or mortars, two of which landed inside the camp, causing significant damage.

The Mission said it would continue to monitor developments in close cooperation with Malian security forces and Forces working under Operation Barkhane, adding that it would support regional and local authorities in their response to the attack, in line with its mandate to protect populations.

The Security Council Members' press statement reaffirmed the need to combat by all means, in accordance with the Charter of the United Nations, threats to international peace and security caused by terrorist acts, stressing that any acts of terrorism are criminal and unjustifiable, regardless of their motivation, wherever  and by whomsoever committed,
calling on the Government of Mali to swiftly investigate the attack and bring the perpetrators to justice, stressing that those responsible for the attack should be held accountable.

Council Members reminded States that they must ensure that measures taken to combat terrorism comply with all their obligations under international law, in particular international human rights, refugee and humanitarian law.

The full support of the Council for MINUSMA and the French forces supporting it was reiterated in the Members' statement, which also urged the Secretary-General to swiftly undertake appropriate steps to enhance the safety and security of MINUSMA's personnel and to allow MINUSMA to implement its mandate in its entirety and counter asymmetric threats the Mission is facing. In that regard, Members called on Member States to
enhance their support to MINUSMA in this regard, including by providing
technical expertise and logistical support needed.

Reiterating their support for the Special Representative of the Secretary-General in Mali and MINUSMA to assist the Malian authorities and the Malian people in their efforts to bring lasting peace and stability to their country, as mandated by the Security Council in resolution 2164 (2014), Council Members also called on the Malian parties to reach a
comprehensive and inclusive peace agreement without delay to help restore security in Mali.