YANGON, Jan 20, 2015 (AFP) - A senior US diplomat Tuesday criticised Myanmar's policies which impose severe restrictions on the Muslim Rohingya community in Rakhine, saying they "oppress" people in the strife-torn state. 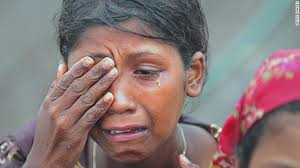 Violence between Buddhists and the Muslim minority community tore through the western state in 2012, leaving over 200 people dead and sparkling outbreaks of religious violence across the country that have overshadowed its democratic transition.

Assistant Secretary of State Anne Richard, a senior envoy on refugees, said after a visit to Rakhine that it had a "very repressive" atmosphere, with both communities suffering from the fallout of the violence three years ago.

She highlighted a rare example of communities trading with each other at one market in the state, which otherwise remained almost completely segregated along religious lines.

"That's really what we would like to see happen, but it is structurally impossible for that to happen now, given the policies that are being carried out there that really oppress people," she told reporters.

Some 140,000 people, mainly Muslims, are trapped in miserable displacement camps around the state capital Sittwe after losing their homes in the 2012 unrest.

Hundreds of thousands of Rohingya living in isolated northern Rakhine are also subject to a web of restrictions governing where they can travel, what work they can do and how they can educate their children.

The Rohingya are seen by the Myanmar government and many local people as illegal immigrants from neighbouring Bangladesh, and the vast majority are denied citizenship.

Richard said both Buddhist and Muslim communities were being "pulled down" by the situation, adding it was "lose-lose" for everyone in the impoverished state.

Hostility and mutual fear have permeated every level of society, she said, but added that it was up to the national government in the capital Naypyidaw to solve the crisis.

"In order to fix this it is not going to be fixed locally, it has to be fixed with Naypyidaw involvement," she said.

The United Nations has recently passed a resolution urging Myanmar to grant the stateless Rohingya access to citizenship -- stoking controversy in the Buddhist-majority country.

On Friday the UN Special Rapporteur on Myanmar, Yanghee Lee, said acute tensions between Muslims and Buddhists in Rakhine could have "far-reaching implications".

Lee was speaking at the end of a visit to the country dogged by monk-led protests accusing her of pro-Rohingya bias.