NEW DELHI, Jan 31, 2015 (AFP) - India on Saturday succeeded for the first time in using a mobile launcher to test-fire a long-range missile capable of delivering a nuclear warhead deep inside rival China. 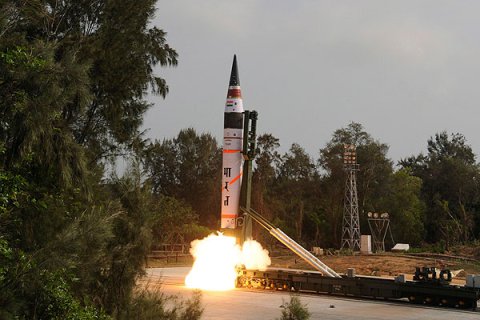 Although Saturday's launch was the third test of the Agni V missile, it was the first time the weapon had been fired from a so-called canister mounted on a truck rather than from a concrete launchpad used in previous trials.

"Successful test-firing of Agni V from a canister makes the missile a prized asset for our forces," Prime Minister Narendra Modi said on Twitter after the test on an island off the eastern state of Orissa.

The Agni V -- developed by India's Defence Research and Development Organisation -- was first tested in April 2012.

Analysts say the Agni V has the range to strike any target on the Chinese mainland, including military installations in the far northeast.

India sees the rocket, which has a range of 5,000 kilometres (3,100 miles), as a key boost to its regional power aspirations and one that narrows -- albeit slightly -- the huge gap with China's missile systems.

Agni, meaning "fire" in Sanskrit, is the name given to a series of rockets India developed as part of a guided missile development project launched in 1983.

While the shorter-range Agni I and II were mainly developed with traditional rival Pakistan in mind, analysts say later versions with a longer range reflect the shift in India's focus towards China.

India and China, each with a population of more than one billion, have prickly relations and a legacy of mistrust that stems from a brief but bloody border war in 1962.

India, the world's biggest arms importer, is in the midst of a $100-billion defence upgrade programme.

The new right-wing government has cleared long-delayed projects worth over $16 billion since storming to power at elections in May.

Modi has pushed for greater indigenisation of its defence industry, saying India must build up its military might to the point that no other country "dare cast an evil eye" on the South Asian nation.
Share to
Tags
India ، missile ، test ، nuclear ، warhead
Your Comment