Iran urges halt to flow of arms into Syria

TEHRAN, YJC. -- Iran’s Deputy Foreign Minister for Arab and African Affairs Hossein Amir-Abdollahian says the best way to end the violence in Syria is to stop the flow of arms to the foreign-backed militants fighting inside the Arab country.
In a Monday press conference in the Egyptian capital, Cairo, Amir-Abdollahian also called on the countries neighboring Syria to 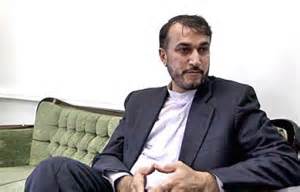 strictly control their borders in a bid to halt the smuggling of weapons into the country.

The Iranian official said Tehran and Cairo "share similar views” with respect to putting an end to the violence in Syria, adding, "We agreed on rejecting any foreign intervention in Syria.”

Amir-Abdollahian warned that foreign powers are seeking to disintegrate Syria by fueling the crisis in the Arab country.

The Iranian official further dismissed as "baseless” claims that Iran is interfering in the affairs of Islamic and Arab countries, stressing that that the Islamic Republic has common interests with the regional states.

Syria has been experiencing unrest since March 2011, and many people, including large numbers of Syrian army and security personnel, have been killed in the violence.

Damascus says the chaos is being orchestrated from outside the country, and there are reports that a very large number of the militants fighting in the country are foreign nationals.

The Syrian government says the West and its regional allies including Qatar, Saudi Arabia, and Turkey are supporting the armed groups.
Press TV.
Share to
Tags
Arm ، Syria ، Iran ، Arab
Your Comment