Terror in Berlin and Ankara: The West Should End the Hypocrisy in Syria

TEHRAN (FNA)- Terror strikes Europe again, this time in Berlin, where at least 12 people were killed and 48 wounded Monday when a highjacked truck crashed into a Christmas market. 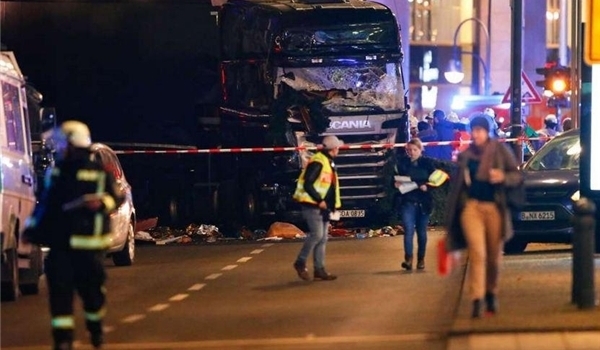 Officials are investigating the attack as a potential act of terrorism, while ISIL has issued a statement claiming responsibility. Once again, the tragic attack has highlighted the barbarism at the core of terrorist groups like ISIL. The death cult uses horrific violence to spread fear in affected populations, galvanise and motivate its supporters, and polarise Western societies by provoking anti-Muslim and anti-Syria backlash.

Here, the German and other Western governments must recognise that they cannot eliminate the risk of terror attacks in their societies forever.  The attack occurred despite German authorities being on high alert in the wake of the state of emergency during the Christmas holiday season.

What they can control is how they respond to such barbaric acts. Anxiety is understandable, but they must not play into the hands of terror groups, give into their fears, adopt anti-Muslim policies and rhetoric that divide their societies, and make the situation worse in Syria.

Escalating the War on Terror or bombing and invading Syria is not the answer to this long anticipated bloody end. More than anything else, Germany and the West need to change course and stop blasting Syria, Iran and Russia for the humanitarian crisis that is the liberated city of Aleppo.

They shouldn’t fuel anti-Muslim, anti-Assad speculation and sentiment either, nor should they point the finger at the Syrian government. They helped destroy Syria in collaboration with the United States and its client states – and proxy forces. All this mayhem will go away if the "Assad must go” syndicate stops supporting "moderate” terror proxies, ends the regime-change war, and embraces liberation of Syria from foreign-backed terror groups as a positive step toward establishing global peace and security.

Experience tells us, the condemnable attack in Berlin is not the first time and certainly it won’t be the last. Europe has been hit by a spate of deadly attacks before, most of them blamed on ISIL. Coming so soon again, the Berlin tragedy proves Germany is no longer able to manage the security threats posed by ISIL.

The attack should never be used as false flag operation by the German government and associates to besiege Syria. It should never be used as pretext to launch more deadly airstrikes on its long-suffering civilian population. The country has become a blowback death trap for regime changers, including Germany, France, Britain, the United States, Israel, Turkey, Jordan and Saudi Arabia. It cannot be wished away.

Any doubters should ask Ankara where Russian Ambassador Andrey Karlov was also assassinated Monday while attending a cultural event. The killer was identified as Mevlut Mert Altintas, an active member of the Ankara Police Department.

The international civil society condemns this cowardly act – just like the Berlin attack - and once again calls for solidarity with the people of Russia and Germany as well as coordinated efforts to defeat terrorism in Iraq and Syria. This is the only way ahead. Anti-Syria policy or anti-Muslim proposals and rhetoric will only alienate Muslims in the West, feed into ISIL’s objective to polarize the international community, and worsen the situation in Syria.

If the Berlin and Ankara terror attacks are any indication, the West has no choice but to end the hypocrisy in Syria. Along with their allies Iran, Russia and Hezbollah, the people of Syria are on track to take their country back from ISIL, Al-Qaeda, and other head-chopping terror groups. The only sensible policy is for the United States and Europe, Germany and Turkey in particular, to stop demonising Syria, Iran, Russia and Hezbollah, and start treating them as the true friends of Syria.
At this time of year, when the rest of the world is busy celebrating the Christmas holiday season, the victors of Aleppo are still sacrificing their lives to save the long-suffering people of Syria elsewhere from the face of terror and modern evil.
Share to
Related News
Belgium voices alarm over spread of Saudi-backed Wahhabism
Tags
terror ، Berlin ، Ankara ، the West
Your Comment