German police are looking for an asylum-seeker from Tunisia after finding an identity document under the driver's seat of a truck that ploughed into a Berlin Christmas market and killed 12 people, officials and security sources said on Wednesday. 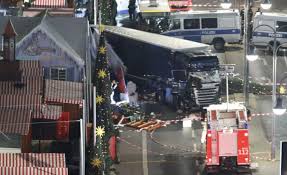 The federal prosecutor's office offered a reward of up to 100,000 euros (£84,400) for information leading to the capture of the suspect, whom it identified as 24-year-old Anis Amri.

"Beware: He could be violent and armed!" the prosecutor's office said in a statement, in which it described Amri as 1.78 metres (5'8") tall, with black hair and brown eyes.

Amri's father and security sources told Tunisia's Radio Mosaique that he had left Tunisia seven years ago as an illegal immigrant and had spent time in prison in Italy.

In Duesseldorf, Ralf Jaeger, interior minister of the western state of North Rhine-Westphalia (NRW), said the Tunisian appeared to have arrived in Germany in July 2015 and his asylum application had been rejected.

He seemed to have used different names and had been identified by security agencies as being in contact with an Islamist network. He had mainly lived in Berlin since February, but was recently in NRW, Jaeger added.

After being turned down for asylum, the man should have been deported but could not be returned to Tunisia because his documents were missing, he said.

"Tunisia at first denied that this person was its citizen," said Jaeger, adding that German authorities started the process of getting new identity papers in August 2016. "The papers weren't issued for a long time. They arrived today."

A judicial source told Reuters that German authorities had observed Amri over a period this year to try to determine whether he had planned a robbery to fund the purchase of automatic weapons for a possible attack with accomplices, Reuters reported.

Authorities stopped their monitoring activities because they could not prove their suspicions, the source said.