Hundreds of people have staged a mass demonstration in Nigeria to express solidarity with prominent Bahraini Shia cleric Sheikh Isa Qassim, who has been stripped of his nationality and summoned to attend a court hearing. 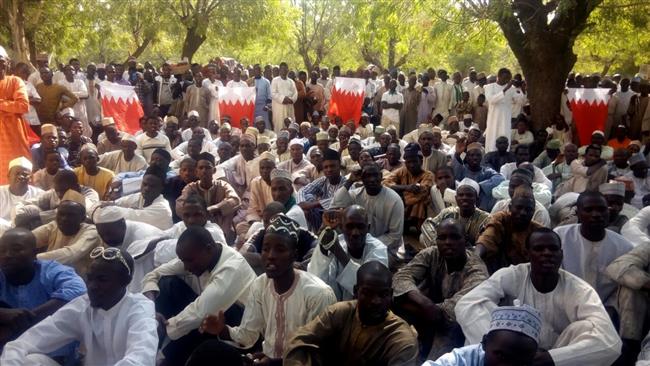 The protesters held a rally in Nigeria’s second largest city of Kano, following Friday prayers to voice their strong support for the 79-year-old cleric, and denounce a recent raid on his supporters.
They held pictures of Sheikh Qassim and Sheikh Ibrahim Zakzaky, the jailed leader of the Islamic Movement in Nigeria (IMN), slamming Saudi Arabia’s support for the Manama regime.
"We have gathered here to condemn the Bahraini regime’s [Wednesday] attack on the sit-in near Sheikh Qassim’s residence” in the Arab country’s northwestern village of Diraz, said Sheikh Abdul Qadir Sanusi, a spokesman for the IMN.
He also censured the revocation of the senior Bahraini cleric’s nationality as well as Manama’s continued persecution of Shia Muslims.
The Al Khalifah regime has pressed charges of "illegal fund collections, money laundering and helping terrorism” against Sheikh Qassim. He has strongly rejected the accusations.
On June 20, Bahraini authorities stripped the clergyman, who is the spiritual leader of Bahrain’s dissolved opposition bloc, the al-Wefaq National Islamic Society, of his nationality.
They later dissolved the Islamic Enlightenment Institution, founded by Sheikh Qassim, in addition to the opposition al-Risala Islamic Association.
Thousands of anti-regime protesters have held numerous demonstrations in Bahrain on an almost daily basis ever since a popular uprising began in the kingdom on February 14, 2011.
They are demanding that the Al Khalifah dynasty relinquish power and a just system representing all Bahrainis be established.
Manama has gone to lengths to clamp down on the dissent and rights activists. On March 14, 2011, troops from Saudi Arabia and the United Arab Emirates were deployed to Bahrain to assist the Manama government in its crackdown.
Scores of people have lost their lives and hundreds of others sustained injuries or got arrested as a result of Al Khalifah regime’s crackdown on anti-regime activists.
(Press TV)
Share to
Related News
Belgium voices alarm over spread of Saudi-backed Wahhabism
Tags
Nigerians ، demonstration ، Sheikh Qassim
Your Comment