Netanyahu summons US ambassador over UN rebuke of Israel

Benjamin Netanyahu has summoned US Ambassador to Israel Daniel Shapiro and a group of other foreign envoys over the recent United Nations Security Council vote against illegal Israeli settlements. 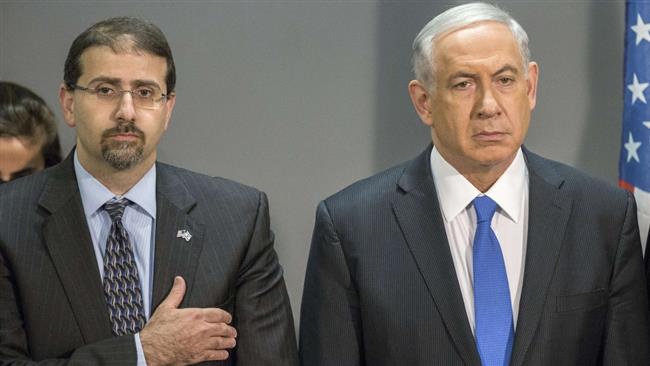 Using diplomatic parlance to downplay the crisis, the US State Department released a statement advising the public that the Israeli prime minister held a meeting with Shapiro on Sunday night.
The statement did not reveal any further details about the "meeting".
The development came two days after Washington’s refusal to veto the resolution by the UN Security Council, a rare split from America’s long-standing practice to shield Israel from UN condemnation.
Aside from Shapiro, Netanyahu also summoned representatives of most of the 14 countries backing the resolution, including permanent Security Council members Russia, China, Britain and France.
According to the Israeli regime’s foreign ministry, 10 of the envoys had answered the summons but Netanyahu had yet to meet with them.
The Israeli premier told his cabinet earlier in the day that Obama and US Secretary of State John Kerry were responsible for the "shameful” vote.
"We have no doubt that the Obama administration initiated it, stood behind it, coordinated the drafts and demanded to pass it,” he fumed.
Tel Aviv has made it clear that it won’t be bound by the Resolution 2334, which demanded an immediate end to illegal settlement activities in the occupied Palestinian territories like East Jerusalem al-Quds.
The White House has denied the notion that Obama was trying to "get back” at Netanyahu by abstaining from the vote.
"Bipartisan policy of the US government for decades has been to oppose settlements. The reason we took this step is because for years, we've seen an acceleration in the growth of these settlements. And frankly, if these current trends continue, the two-state solution is going to be impossible,” Deputy National Security Advisor Ben Rhodes said Friday.
Following the Security Council measure, Netanyahu said he was looking forward to work with US President-elect Donald Trump, who personally intervened to keep the measure from coming up to a vote.
More than half a million Israelis live in over 230 illegal settlements built since the 1967 Israeli occupation of Palestinian territories.
(Press TV)
Share to
Tags
Netanyahu ، US ambassador ، UN
Your Comment