The former UK ambassador to Syria says British policy has worsened the situation in the war-torn country. 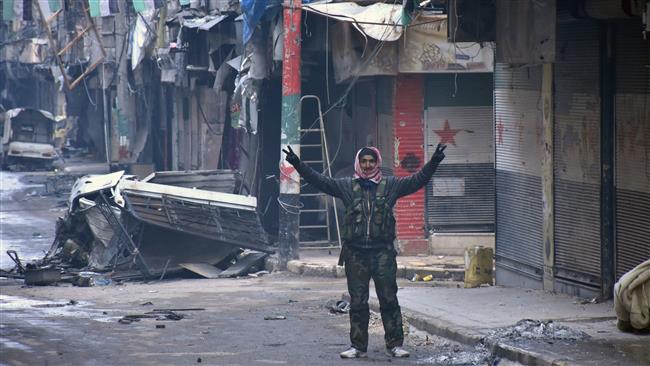 Britain's policy on Syria has been "wrong every step of the way” and has led to hundreds of thousands of civilian casualties, which could have been foreseen, said Peter Ford, who was the ambassador in Damascus from 2003 to 2006.
Speaking on the BBC’s Today program on Friday, Ford said the UK had made matters worse by not putting troops on the ground and instead encouraging militants to launch a doomed campaign.
Ford criticized the UK Foreign Office for lying that President Bashar al-Assad's demise was imminent at the beginning of the conflict and for predicting he would lose power quickly.
"Now they are telling us another big lie, that Assad can't control the rest of the country,” he said. "Well, I've got news for them; he is well on the way to doing so."
The former British diplomat said the Foreign Office also claimed the militant groups were dominated by "these so-called moderates, that proved not to be the case."
On Thursday, Syrian government forces regained full control of Aleppo, a key battleground in the conflict between the Syrian army and terrorist groups.
Ford said President Assad should be given "a little credit" for a "relatively peaceful" end to the siege in Aleppo.
Since March 2011, the United States and its regional allies, in particular Saudi Arabia, Qatar and Turkey, have been conducting a proxy war against Syria. US officials often describe the militants fighting against the Syrian government and people as "moderate opposition” forces.
The years-long conflict has left more than 470,000 Syrians dead and half of the country’s population of about 23 million displaced within or beyond the Arab country’s borders.
(press TV)
Share to
Related News
Moscow slams ‘illegal’ US presence in Syria as Pentagon reserves right for ‘defensive’ attacks
Belgium voices alarm over spread of Saudi-backed Wahhabism
Tags
Britain ، Syria ، Ex-UK ambassador
Your Comment