The national beach soccer teams of Iran and Lebanon are going to hold two friendly football matches within the next few days as part of preparations for the upcoming 2017 Asian Football Confederation (AFC) Beach Soccer Championship. 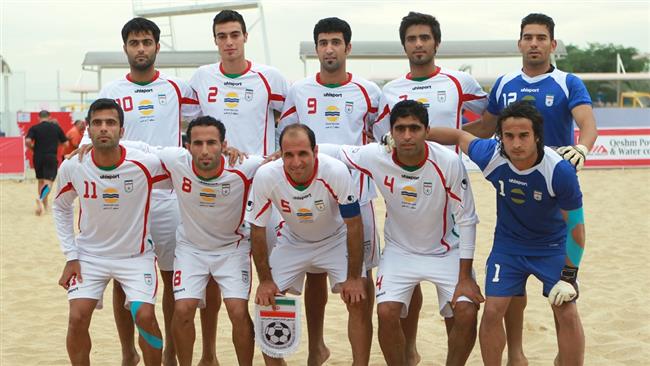 The matches will take place on December 28 and 29 in the southern Iranian port city of Bandar Abbas and at the request of the Lebanese Football Association.
The 2017 AFC Beach Soccer Championship will take place from January 21 to 29 next year in the United Arab Emirates (UAE).
The Iranian outfit has joined squads from Chinese Taipei and Vietnam in Group B of the upcoming event. The Persians will play counterparts from Chinese Taipei in their opening match at Jumeirah Beach in Dubai on January 21.
Australia, Lebanon, Thailand, and the UAE are in Group A.
China has been drawn in Group C along with Indonesia and Oman. Group D consists of Japan, South Korea, and Uzbekistan.
The Iranian men’s national beach soccer team is Asia’s best. According to the latest monthly rankings released by the Beach Soccer Worldwide (BSWW), the Iranian squad collected 1,785 points to maintain its place as the best squad in Asia and claim the fifth spot in the world.
On November 5, the Iranian outfit achieved a commendable second-place finish at the Samsung Beach Soccer Intercontinental Cup Dubai 2016.
In final match in that event, Iran played against South American powerhouse Brazil at the Dubai International Marine Club in the UAE. Team Melli lost the match 2-6 to the Reis da Praia.
(Press TV)
Share to
Related News
AFC names Iranian football super star as 'Asian Maradona'
Tags
Iran ، Lebanon ، soccer
Your Comment