Official: Iranians to Use New Home-Made Biotechnology Drugs in 5 Years

The Iranian people will come to use new biotechnological medicines produced by the country's scientists in the next five years, an official said on Sunday. 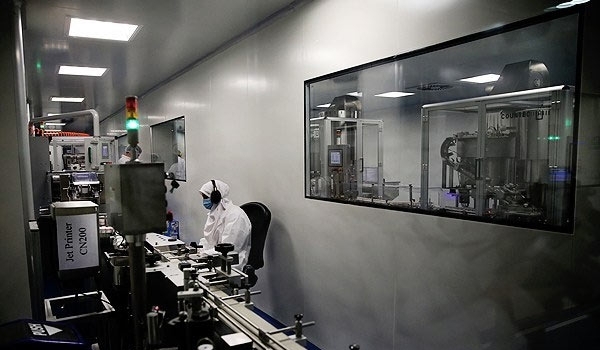 "95% of medicine needed in Iran is produced inside the country now," Secretary of the Headquarters for the Development of Biotechnology affiliated to the Scientific Department of Iran's Presidential Office Mostafa Qaneyee said.
"At present, there are 20 biotechnological drugs in the Iranian market and new medicines will be added to them in the next 5 years," he added.
Iran has taken wide strides in science and technology, particularly in medical and medicinal fields, in recent years.
The country has already mass-produced Doxorubicin - a non-carcinogenic drug - used in lung and breast cancer cases and made based on nano-liposomes technique. The drug with higher efficiency needs lower times for use and naturally lessens side effects, including vascular and heart complications.
Iran has also produced two other non-carcinogenic medicines Paclitaxel for breast and ovarian cancer and oxaliplatin for colon cancer.
Iran is also producing 9 new nano drugs, including anti-inflammatory and anti-diabetes medicines, for the first time in the world.
"9 orally taken nano drugs, including Acetaminophen, Atorvastatin (one of the most effective lipid-lowering drugs), Cyclosporine (an effective drug to prevent rejection of kidney transplants, heart, etc.), Ibuprofen (most widely used analgesic and anti-inflammatory drug), Fenofibrate (the most common drug to lower cholesterol and triglycerides), Repaglinide (of Meglitinides drugs group recently used for diabetes treatment), Azithromycin (effective drug for treatment of respiratory infections, uterine and middle ear), Carvedilol (a drug for the treatment of heart failure, ischemia) and Aprepitant (used to prevent nausea and vomiting that may occur within 24 hours after receiving cancer chemotherapy treatment) have been produced in laboratory scale and semi-industrial scale," Mehrdad Hamidi, a nanodrugs professor, told FNA in October.
(FNA)
Share to
Tags
Iranians ، Biotechnology ، Drug
Your Comment