US President-elect Donald Trump recently dropped a bombshell when he suggested in a tweet that America must greatly expand its nuclear capability until when the world comes to its senses. The tweet came less than 24 hours after Trump’s meeting with a dozen Pentagon officials to discuss of the US nuclear arsenal. The move was also seen as a kind of reaction to remarks by President Vladimir Putin who suggested Russia should reinforce its nuclear arsenal. To shed more light on the latest controversy, we have spoken to two experts. 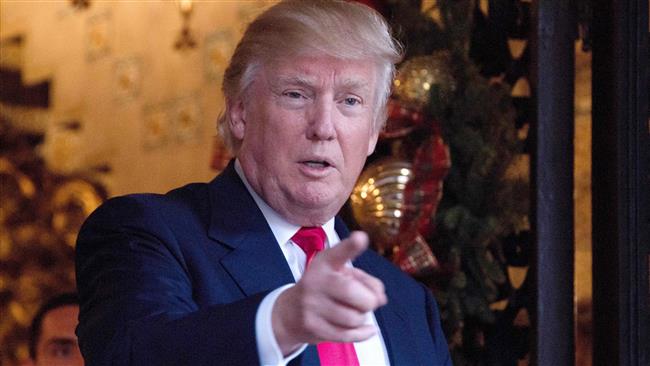 Jim W. Dean, managing editor of Veterans Today from Atlanta, told Press TV’s "The Debate” program that Donald Trump is eager to resort to a cowboy style foreign policy to satisfy his narcissist character and leave other states in limbo over what he is going to do on the nuclear issue.
"Trump’s tone was cowboy style” and showed "his narcissism that he always wants the attention on him,” Dean said, adding that is why he uses Twitter to make announcements.
"We’re dealing with a loose cannon presidency,” and it is a matter of time to see if Trump’s staff would be able to "rein him in,” particularly over his tweeting, he noted.
The analyst said that Trump is doing this in a calculated way. "He is saying different things and he is leaving definitions vague. He wants to keep opponents and possibly friends like Europe and NATO also guessing what he is going to do.”
Dean warned that using a cowboy foreign policy and hiding the bottom line of policies may be suitable in some cases but "that is not a good strategy [when it comes to nuclear plans}. Because you may want to have your enemies and adversaries potentially guessing what you want to do, but you don’t want to have your allies wondering what it is you really want to do.”
He said the US is pursuing an official first-strike policy. "[It] reserves the right to strike first against any country that may be a threat to it at some time in the future.”
The commentator also touched upon the nuclear arms race during the Cold War, noting, "One of the things that we are always concerned about is not war, because people want it. But [it’s] war because of miscalculation and even now so because of false-flag situation(s) wherein a third player is able to arrange an attack on someone and make it look like another party did it, which requires them to retaliate.”
Meanwhile, Michael Lane, the founder of the American Institute for Foreign Policy from Washington, said Trump’s message goes to everyone who is a member of the nuclear club and "his message has been that he is not going to be a status quo kind of guy. He is not going to sit around and let nuclear weapons proliferate the way it has happened in previous years.”
He said that Trump is holding up the possibility that the United States will "greatly” expand its capabilities, but the issue can mean many number of things, including the "modernization” of nuclear arms, an "increase in the number of warheads” or an "increase in the deployment of warheads” or an "increase in the methods of delivery of warheads.”
He noted the president-elect is in fact warning the nuclear world that the United States is going to take an active role in developing nuclear capabilities and that he is not going to be "an idle diplomat and watch proliferation take place.”
Lane, too, believes that Trump is going to bring back a "cowboy diplomacy, which is not to say that he is a wild reckless unpredictable cowboy. But he is very comfortable with the rest of the world thinking that he is a wild reckless cowboy and he is capable of [doing] anything.”
According to the analyst, two former presidents – Richard Nixon and Ronald Reagan – "were very successful in their foreign policy” because they pursued the cowboy style.
"Trump is doing his best to cast himself in that particular light. So, no one knows what his bottom line is,” he said.
"Neither Barack Obama nor Donald Trump wants to get involved in any military conflict,” but "the difference in the approach here is that Trump always criticized Obama for telegraphing specifically in advance what our bottom line objectives were and then that became the ceiling that we had to negotiate down from,” he added.
"Trump’s tweet came out merely hours after Putin referenced the upgrade of the Russian nuclear capabilities in speech,” Lane said.
However, he noted, "On most other issues, it appears that Trump and Putin are going to attempt to improve US-Russia relations, and  cooperate on more things. They’re going to get along and find areas of common [interest] rather than areas of conflict.”
"Trump also wants to send a message to the rest of the world that things are going to be approached differently in his administration,” he argued.
The modernization of the US nuclear arms has come under attack from opponents of nuclearization, who are worried about the prospect of a new arms race with Russia and China.
The United States possesses an arsenal of about 7,000 nuclear warheads, second only to Russia, which has a few hundred more nukes. Russia and the US signed the New START (Strategic Arms Reduction Treaty) in 2010, which entered into force in 2011 and is expected to continue until 2021.
(Press TV)
Share to
Related News
Three transients arrested in Atlanta highway bridge collapse
FBI request for Twitter account data may have overstepped legal guidelines
Tags
Trump ، cowboy ، diplomacy
Your Comment