Newt Gingrich, the former speaker of the US House of Representatives, has praised President-elect Donald Trump for his focus on expanding America’s nuclear weapons stockpile, saying the strategy "is exactly right." 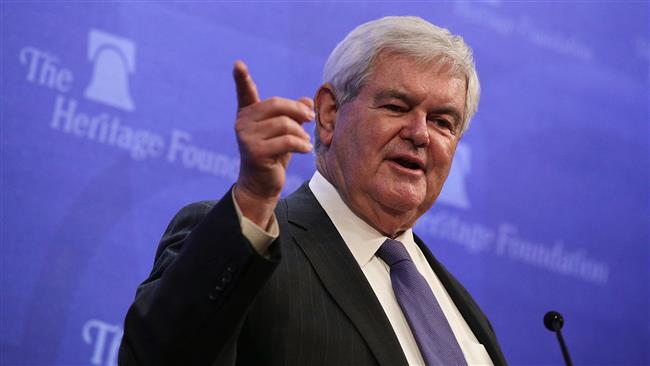 In an interview with Fox News on Sunday, Gingrich said, "I think for the next president to say, 'You know, we're going to have to systematically rebuild our nuclear capability,' is exactly right.”
Gingrich, who has announced that he wants to help the president-elect "strategically," argued that Russia, China, and North Korea are building up their nuclear and the US capabilities should "overmatch” them. "We have to candidly overmatch.”
"The truth is, the Russians have been rebuilding their nuclear capability," he said. "We have allowed ours to weaken. The Chinese have been rebuilding their nuclear capability. The North Koreans are trying to build missiles to reach the continental United States.”
"The Iranians are trying to build a nuclear weapon,” Gingrich added, repeating the old Republican mantra about the Islamic Republic, which, even according all 16 US intelligence agencies, has not a nuclear weapons program. The agencies have repeatedly conceded this during their classified annual briefings to Congress.
Trump on Thursday tweeted that the United States "must greatly strengthen and expand its nuclear capability until such time as the world comes to its senses regarding nukes."
On Friday, he followed that by saying in an interview, "Let it be an arms race... we will outmatch them at every pass and outlast them all."
Pointing to Trump’s recent comments, a spokesman for his transition team said the president-elect aimed to ensure that other countries such as Russia and China would not step up their nuclear capabilities.
The US currently has an arsenal of about 7,000 nuclear warheads, second only to Russia, which has a few hundred more.
The US was the first country to manufacture nuclear weapons and is the only country to have used them in combat during the bombings of Hiroshima and Nagasaki in Japan near the end of World War 2.
The United States and its allies "have fostered and promoted nuclear weapons aimed at Russia” for years and "the use of the Russian threat is simply a pretext to augment the US offensive nuclear capacity,” James Petras, an American writer and retired professor, told Press TV earlier this month.
(Press TV)
Share to
Tags
Gingrich ، US ، nuclear arsenal
Your Comment