Muslims must unite behind UN vote against Israel settlements: Iran

An Iranian official has urged all Muslim countries to stand united behind a recently-approved United Nations Security Council resolution that censures Israel for its settlement activities in the occupied Palestinian territories. 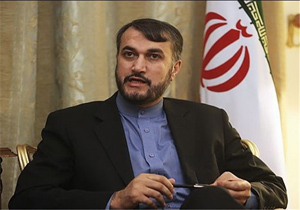 "Muslim countries’ united support for the Security Council resolution against the Zionist regime’s settlements is the least that must be done,” said Hossein Amir-Abdollahian, the Iranian parliament speaker's special advisor on international affairs, on Monday.

He added that the Organization of Islamic Cooperation (OIC) and the Arab League must make use of this opportunity and carry out their Islamic and humanitarian duty to support the oppressed Palestinian people.

Amir-Abdollahian, who is also the secretary general of the International Conference in Support of the Palestinian Intifada, added that support for the oppressed Palestinian people would reinforce unity in the Muslim world.

He also stressed the importance of preventing the "illegitimate and terrorist Israeli regime,” which supports the Takfiri terrorists in the region, from blustering and political bullying.

The UN Security Council’s Resolution 2334 was passed with 14 votes in favor and one abstention - by the US - on Friday. It was the first resolution on Israel and the Palestinians that the 15-member body had passed in about eight years.

The text of the resolution had originally been drafted by Egypt, which decided to withdraw it under "intense pressure.”

Israel had asked US President-elect Donald Trump to pressure Cairo to delay voting on the draft resolution. Egyptian President Abdel Fattah el-Sisi is believed to maintain good ties with Trump.

After Egypt’s withdrawal, however, Senegal and New Zealand, two other members of the UN Security Council, forwarded a motion of their own for a vote on the text.

The US administration, by abstaining, decided to break with a long-time policy of vetoing condemnatory resolutions against Israel.

Resolution 2334 condemned Israeli settlements in East Jerusalem al-Quds and the occupied West Bank as a "flagrant violation under international law,” which it said was "dangerously imperiling the viability” of peace and the establishment of a Palestinian state.

In flagrant defiance of the recent UN Security Council resolution, the Hebrew-language daily Israel Hayom reported on Sunday that the so-called Jerusalem al-Quds Local Planning and Building Committee was poised to approve some 5,600 housing units in East Jerusalem al-Quds.