US backs terrorists 'to disrupt a country': Jill Stein 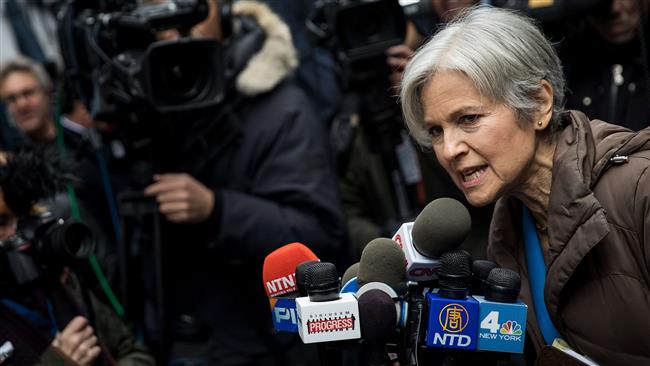 "In case you didn't know, the United States funds and arms terrorist groups like Al-Qaeda and ISIS when it needs them to disrupt a country,” Stein wrote in her Twitter account on Sunday.

Stein was a vocal critic of Washington’s policies when she was running for president in the 2016 election cycle.

The US and some of its regional allies, in particular Saudi Arabia, Qatar and Turkey, have been arming and funding militant groups fighting the Syrian government for nearly six years.

Senior US officials, including President Barack Obama and Secretary of State John Kerry, have frequently called for the removal of Syrian President Bashar al-Assad.

Units of so-called moderate militants have been transported out of Syria to train at camps in Turkey, Jordan and other locations under a $500-million program run by the Pentagon. However, the vast majority of the militants left the battlefield or turned over their US-supplied weapons to other groups, officials have said.
After repeated setbacks to that program, US officials revamped the initiative so that only small numbers of carefully-vetted militant "leaders" would be trained to direct airstrikes in Syria.

US officials admitted in September that the revised program had also largely failed, having trained less than 100 additional militants.

President-elect Donald Trump has blamed Obama and former Secretary of State Hillary Clinton for the rise of the Daesh terrorist organization and instability in the Middle East.

"The Obama-Clinton foreign policy unleashed ISIS (Daesh) (and) de-stabilized the Middle East," Trump said in a foreign policy speech in August as a presidential candidate.

Earlier this month, a member of Congress acknowledged that the US government has been involved in supporting terrorists in Syria and unveiled plans to stop the supplies and training.
"We must prohibit taxpayer dollars from being used to provide weapons/support to al Qaeda, ISIS & other terrorist groups. Period,” Democratic Rep. Tulsi Gabbard ﻿of Hawaii said in a tweet on December 12.

"We must stand together and stop our gov from assisting the same terror groups we are supposedly trying to defeat,” she said in another post the following day.

According to a press release issued by her office, Gabbard has introduced the "Stop Arming Terrorists Act,” which would prohibit the US government from using American taxpayer dollars to provide funding, weapons, training, and intelligence support to terrorist groups.
(Press TV)
Share to
Related News
FBI request for Twitter account data may have overstepped legal guidelines
Tags
US ، terrorists ، Stein
Your Comment