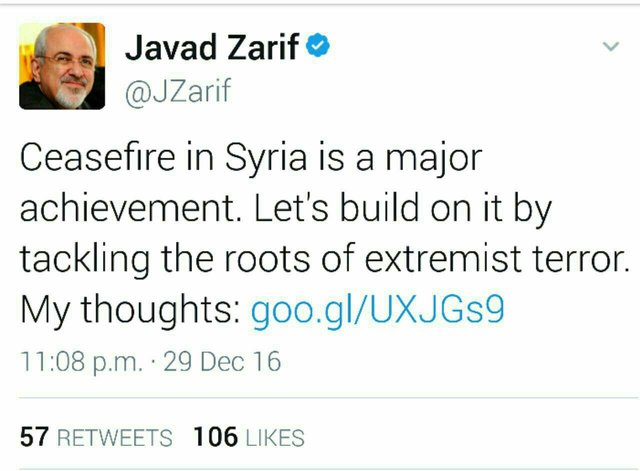 Ceasefire in Syria is a major achievement. Let's build on it by tackling the roots of extremist terror, he twitted.

Zarif and his Russian counterpart Sergei Lavrov in a phone call on Thursday hailed the ceasefire as they discussed the latest developments in Syria.

The two sides welcomed comprehensive ceasefire across Syria and stressed continuous battle against terrorism, the ISIL and al-Nusra terrorist groups and their allies.

Zarif and Lavrov agreed to continue consultation and coordination in line with three-lateral cooperation of Iran-Russia and Turkey for holding talks between Syrian government and opposition in Astana, Kazakhstan.

The Syrian military has announced a nationwide halt to fighting starting at midnight, in a move that could promote the diplomatic efforts aimed at ending years of Takfiri violence in the Arab state.