Russia's Putin decides not to expel US diplomats

Russian President Vladimir Putin decided not to expel US diplomats in reprisal for Washington's recent sanctions. 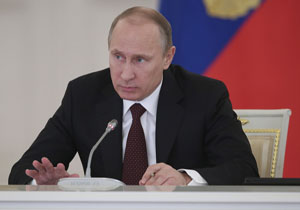 "We will not expel anyone," Putin said in a statement on Friday.

Earlier, Russian Foreign Minister Sergei Lavrov proposed to expel 35 US diplomats in retaliation for a similar move by Washington.

The ministry also asked President Putin to ban diplomats from using a holiday home located in western Moscow and a warehouse in the north of the Russian capital in reaction to US President Barack Obama’s decision to close two Russian compounds.

On Thursday, Obama ordered a series of new sanctions against Russia as well as the expulsion of 35 Russian diplomats, accusing them of being spies.

The US president had also imposed sanctions on two Russian intelligence agencies over allegations that they had interfered in the 2016 presidential election in the US by cyber attacks. Russia denied the hacking accusations, Presstv reported.

Putin slammed the sanctions as a "provocation aimed to further undermine Russian-American relations." He regretted that Obama was ending his term in such a way.

He further said in the statement published on the Kremlin's website that Moscow would watch the policy of President-elect Donald Trump when he takes office next month to decide on ties between the two countries.

"Reserving the right to retaliatory measures, we... will be planning our next steps in restoring US-Russian relations based on the policies pursued by the administration of President Donald Trump," the Russian president said.

Russian Prime Minister Dmitry Medvedev also regretted the new US sanctions, saying on his official Facebook page that Obama was ending his term in "anti-Russia agony."