Polish President Andrzej Duda and hundreds of mourners on Friday attended the funeral of Lukasz Urban, the Polish truck driver who was killed and his vehicle used to crash into a Berlin Christmas market last week. 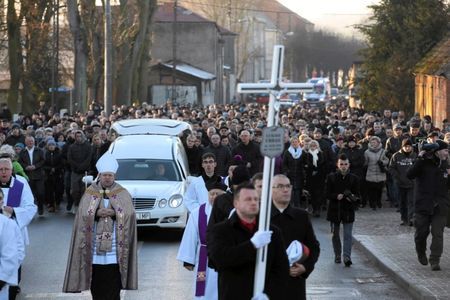 The 37-year-old father of a teenaged boy was among 12 people killed in the attack claimed by the ISIL terrorist group.

Germany's Federal Prosecutor's Office said on Thursday Urban had died shortly before the attack and forensic tests were needed to determine whether he had been shot with a gun later found on the attacker in Milan.

Mourners packed a small church in Banie, the driver's home village, for mass, while several trucks parked nearby honked their horns to honor the driver, private television channel TVN24 showed.

Duda laid a wreath and briefly kneeled in front of Urban's white coffin, after attending mass in the village in northwestern Poland, 15 km (9 miles) from the German border.

Prime Minister Beata Szydlo said earlier Urban's son and wife would receive a special pension, while an internet crowdfunding campaign started by a British truck driver has raised more than 177 thousand pounds ($218,000) for the family.

"Poles have fallen victim in terrorist attacks before," Szydlo said in a letter to the family read during Friday's church service. "But the tragedy in Berlin is extraordinary in terms of its ruthlessness and brutality."

A local trucking association boss, Romuald Szmyt, laid the blame for Urban's death on the
company due to receive his cargo of 24 tons of steel elements, saying its officials should not have made the driver wait to unload.

"Lukasz Urban was a very good driver," he told mourners. "He was meant to unload on Tuesday but he arrived early. Two German drivers arrived and they were unloaded on Monday. He had to wait."