A bridge in China suspended over a 1,854-foot gorge became the "world's highest" when it opened to automotive traffic Thursday. 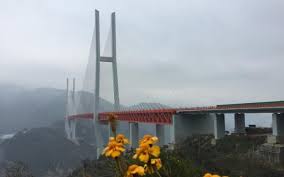 The Beipanjiang Bridge took three years to build, cost more than $146.7 million dollars, and stretches to be 4,396 feet long.

Its four-lane roadway sits nearly two thousand feet over the Beipan River, which it's named after, to connect the Yunnan and Guizhou provinces in southwest China, People's Daily Online reported.
It surpassed the 1,837-foot-tall Sidu River Bridge for its world record title.

We know what you're thinking: $146.7 million is cheap! And it is! After all, when the Golden Gate Bridge spanning San Francisco Bay was built in 1933 it cost $1.5 billion (in adjusted dollars), and the brand new New Bay Bridge, on the other side of town, ended up costing a whopping $6.7 billion when it was finished in 2013.

The Beipanjiang Bridge is part of the 2,115 mile Hangrui Highway which connects Hangzhou to the China-Myanmar border crossing in Ruili. Construction actually finished on the bridge September 10, but the massive sky-scraping overpass only opened to vehicular traffic today.

Though the Beipanjiang Bridge might be the highest bridge in the world, the world's tallest bridge is still the Millau viaduct in France which tops out at 1,125 feet.