Iraq not to allow division of Mosul, says al-Maliki

Iraqi Vice-president and Secretary-General of Islamic Dawa Party Nouri al-Maliki reiterated that the country would not allow division of Mosul. 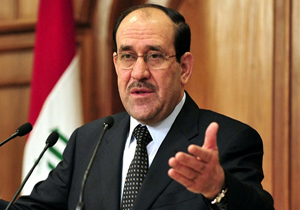 Referring to certain remarks on partition of Mosul, he said, "The remarks are not acceptable. We will now allow partition of Mosul. There is a plan about this issue but we reject it,” he said in a press conference here in Tehran on Monday.

The Iraqi official said that Iran stands in the frontline of confronting Zionist regime as the regime is after breaking regional countries.

Terrorism is resulted from Wahhabism, he said, as warning Saudi Arabia to stop acting as an origin of terrorism.