New United Nations Secretary-General Antonio Guterres urged the Security Council on Tuesday to take more action to prevent conflicts instead of just responding to them as he pledged to build the world body's mediation capacity. 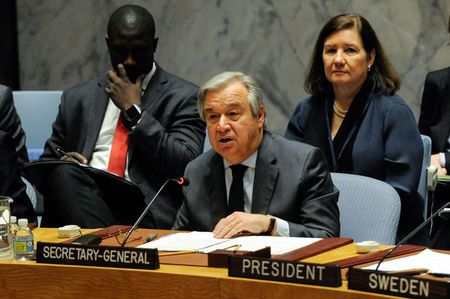 "The United Nations was established to prevent war by binding us in a rules-based international order. Today, that order is under grave threat," Guterres said in his first address to the 15-member council since taking office on Jan. 1.

Guterres, a former prime minister of Portugal and former U.N. refugee chief, said too many opportunities to prevent conflicts had been lost due to mistrust among states and concerns over national sovereignty.

"Such concerns are understandable, in a world where power is unequal and principles have sometimes been applied selectively. Indeed, prevention should never be used to serve
other political goals," he told the council.

"On the contrary, prevention is best served by strong sovereign states, acting for the good of their people," he said.

Guterres asked the council to make greater use of Chapter 6 of the U.N. Charter, which allows the body to investigate and recommend procedures to resolve disputes that could eventually endanger international peace and security.

"We will launch an initiative to enhance our mediation capacity, both at United Nations Headquarters and in the field, and to support regional and national mediation efforts," he said.

"We spend far more time and resources responding to crises rather than preventing them," Guterres said. "We need a whole new approach."