With a final call of his campaign mantra "Yes We Can," President Barack Obama urged Americans on Tuesday to stand up for U.S. values and reject discrimination as the United States transitions to the presidency of Republican Donald Trump. 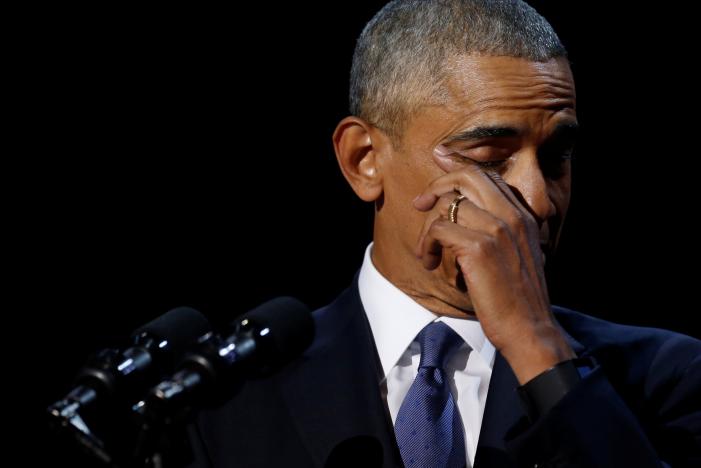 In an emotional speech in which he thanked his family and declared his time as president the honor of his life, Obama gently prodded the public to embrace his vision of progress while repudiating some of the policies that Trump promoted during his campaign for the White House.

"So just as we, as citizens, must remain vigilant against external aggression, we must guard against a weakening of the values that make us who we are," Obama told a crowd of 18,000 in his hometown of Chicago, where he celebrated his election in 2008 as the first black president of the United States.

Trump, who takes office on Jan. 20, proposed temporarily banning Muslims from entering the country, building a wall on the border with Mexico, upending a global deal to fight climate change and dismantling Obama's healthcare reform law.

Obama made clear his opposition to those positions during fiery campaign speeches for 2016 Democratic presidential nominee Hillary Clinton, but has struck a more conciliatory tone with Trump since the election.

In his farewell speech, he made clear his positions had not changed and he said his efforts to end the use of torture and close the U.S. prison in Guantanamo Bay, Cuba, were part of a broader move to uphold U.S. values.

"That's why I reject discrimination against Muslim Americans," he said in a clear reference to Trump that drew applause.

He said bold action was needed to fight global warming and said "science and reason" mattered.

"If anyone can put together a plan that is demonstrably better than the improvements we’ve made to our healthcare system, that covers as many people at less cost, I will publicly support it," he said in another prodding challenge to his successor.
(Reuters)
Share to
Tags
Obama ، values ، final speech
Your Comment