Iranian delegation which is going to take part in Astana meeting on Syria held separate bilateral talks with Turkish and Russian teams in Astana, capital city of Kazakhstan. 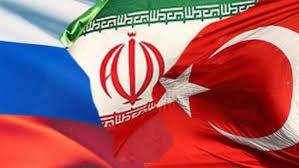 The main meeting starts on Monday and is scheduled to last for two days.

Bilateral and trilateral meetings of Iran-Russia and Turkey are informal and come for further coordination among the three sides, diplomats said.

Main talks are scheduled to be attended by representatives of Iran, Russia, Syria, Kazakhstan, Turkey, certain Syrian opposition groups, UN special envoy for Syria Staffan de Mistura and probably the US on Monday.

Iranian officials, most importantly Foreign Minister Mohammad Javad Zarif, have voiced opposition to Washington’s attendance, citing its dedication to the ouster of the Syrian government thought supporting the terror groups