Iran, Russia and Turkey issued the final statement, stressing stabilizing ceasefire in Syria as Astana talks wrapped up on Tuesday. 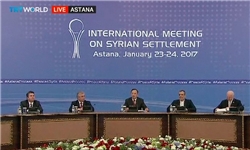 The statement reiterated that there is no military solution to Syrian criss, and that all sides should abide by the comprehensive ceasefire in Syria.

The statement read out by Kazakh Foreign Minister Kairat Abdrakhmanov, stressed that the international community should endeavor to get access to a political solution to implement Resolution 2244.

The statement called on opposition groups to attend the upcoming meeting in Geneva on February 9, and reiterated that all sides should work fighting terrorist groups including Al-Nusra and the ISIL.

The three countries as guarantees of comprehensive ceasefire in Syria vowed to form a trilateral mechanism to supporting ending conflicts and confront any violation of ceasefire.

The statement supported resuming talks between Syrian sides and stressed commitment of the three countries to keep Syrian territorial integrity, strengthening ceasefire agreement and sending human aid to the country.

Mohammed Alloush, who headed the Syrian opposition delegation to Astana talks, said the opposition had reservations about the final communiqué of the talks, adding that opposition groups had submitted a separate ceasefire proposal.

He said Russia was expected to respond within a week to the ceasefire proposal offered by opposition groups.