US Muslims involved in one-third of 1% of all murders: Study

Muslims living in the United State were involved in only one-third of 1 percent of all murders in the country in 2016, according to a new study, even as President Donald Trump seeks to portray Muslims as dangerous and ban them from entering the US. 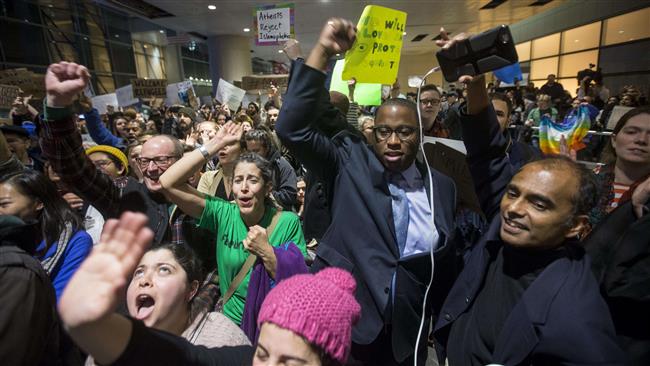 Only 46 Muslim Americans (defined as "Muslims who lived in the US for an extended period”) were linked to violent extremism at home or abroad last year, a study from Duke University sociologist Charles Kurzman has found.

The study shows that of those 46, just 24 Muslims were actually implicated in a concrete terrorist plot. The others did things like attempting to travel to Syria to join the Daesh (ISIL) terrorist group.

Overall, 54 people were killed by a Muslim American last year, the vast majority of which (49) came in a single attack — the Pulse nightclub shooting on June 12 in Orlando, Florida.

By contrast, about 11,000 Americans were killed in gun violence in 2016, although Trump has never said anything about creating a registry of gun owners.

According to an estimate by the Pew Research Center, there were 3.3 million Muslims living in the United States in 2016, about 1 percent of the total American population.

Muslim Americans, in both raw terms and as a percentage of the total US population, commit very small numbers of killings, Kurzman’s research clearly highlights.

"It is flatly untrue that America is deeply threatened by violent extremism by Muslim Americans,” David Schanzer, director of the Triangle Center on Terrorism and Homeland Security, said in a statement accompanying the study’s release.

On Friday Trump signed an executive order that imposes a 90-day ban on entry from citizens of Iran, Iraq, Syria, Yemen, Sudan, Libya and Somalia, blocks refugees from Syria indefinitely, and suspends all refugee admissions for 120 days.

According to a study published in 2015 by the New America Foundation, a Washington-based think tank, white, right-wing Americans present a far greater terror threat to the United States than individuals linked to the al-Qaeda or ISIL, Presstv reported.

Most of the "terror” attacks carried out on US soil since the September 11, 2001 attacks have been committed by white supremacist and radical anti-government groups, the report said.